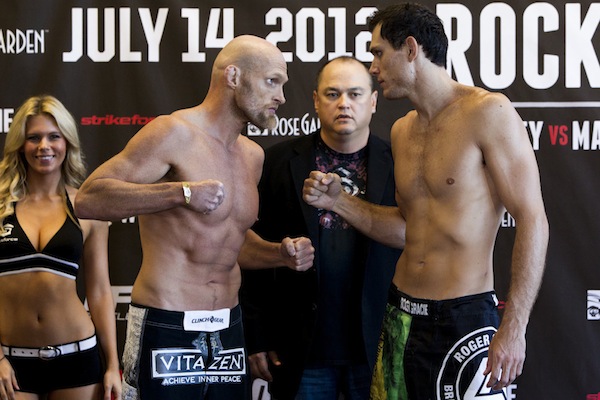 Roger Gracie made the most of his middleweight debut, bloodying and battering Keith Jardine on his way to a unanimous decision victory at the “Strikeforce: Rockhold vs. Kennedy” event.

Keith Jardine looked to establish his jab early but ran into trouble against the reach of Roger Gracie. Gracie stayed patient on the outside, landing his own jab before capitalizing on an overzealous Jardine as he leaped forward. The takedown came easy and from there Gracie went to work. A steady dose of elbows from the full mount position got the blood flowing as time ran out on the first round.

Jardine made the same mistake to start the second round, leaping toward Gracie with a wild flurry. Gracie easily took the fight back to the mat and re-opened the cut with another grinding elbow. Gracie then took the back of Jardine and looked for the rear naked choke, throttling the body of Jardine with a tight body triangle. Gracie transitioned to an arm triangle attempt, but a bloody Jardine fought off the submission to survive the second round.