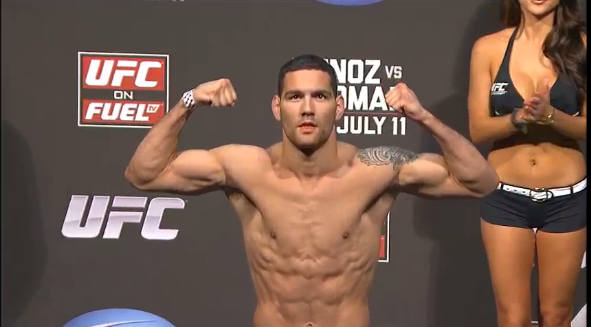 Chris Weidman put the rest of the UFC middleweight division on notice with his thrashing of top contender Mark Munoz.

Weidman (9-0 MMA, 5-0 UFC) dominated from the bell to the stoppage, earning a career-defining TKO victory in the second round at the UFC on Fuel TV 4 event.

Weidman executed perfectly timed takedowns almost immediately to start the bout before showing off his stifling top control and dangerous submission game. Weidman nearly got an early finish with a mounted guillotine, but the gutsy Mark Munoz was able to fend off successive submission attempts. However, Munoz had no answer for the ground game of Weidman, finding himself on the bottom for most of the opening stanza.

Munoz came out more aggressively to start the second, but again Weidman was able to easily take the fight right back to the mat. This time Munoz was able to scramble to his feet and looked to get back in the fight on the feet. After a couple of exchanges, Weidman beat Munoz to the punch, landing a thunderous elbow before Munoz could launch his powerful right hand. The impact sent “The Filipino Wrecking Machine” reeling to the canvas. A flurry of right hands later finally forced Josh Rosenthal to stop the bout at 1:37 of the second round.

The win keeps Weidman perfect at 5-0 in the UFC and moves him one step closer to the top of the UFC’s middleweight division. How close to the top is yet to be seen, but Weidman was clear about who he wants to face next.