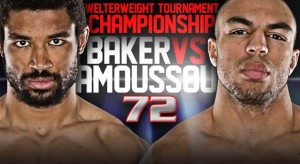 A newly added bout between British knockout specialist Paul Daley (29-12-2) and Rudy Bears (14-10) was announced today by Bellator officials; this matchup will be part of the main card which will air LIVE on MTV2, the prelims are expected to air on Spike.com.

The event will also showcase the semifinals of the Bellator Summer Series Light Heavyweight Tournament as Attila Vegh meets Emanuel Newton and Travis Wiuff faces Tim Carpenter with both fights airing on the main card.

Showing that the preliminary card is not to be taken lightly, an intriguing heavyweight matchup will also be featured as Tampa native Chris Barnett will face off against nearby Ocala fighter Tom Sauer. Barnett, who owns notable victories over Jonathan Ivey and Kenny Garner, looks to build off back-to-back wins in his previous two outings. Sauer, a veteran of 37 professional fights, attempts to add to his impressive three fight winning streak.

Here is the full Bellator 72 card: