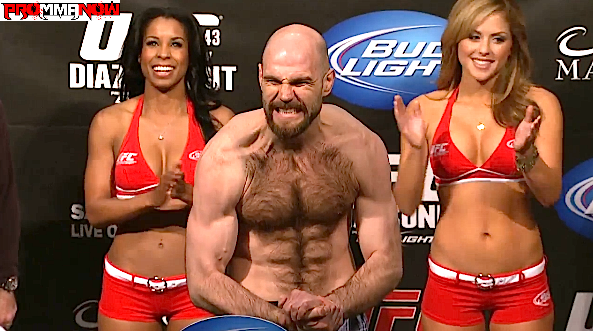 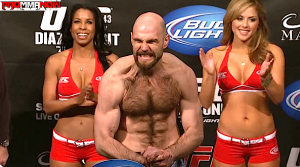 Fighting on short notice, the UFC debut for welterweight Dan “The Anvil” Stittgen (7-2) didn’t go as planned. But with a more full training camp under his belt, Stittgen is eager to show what he’s made of at UFC on FUEL TV 4 on July 11 against Marcelo Guimaraes (7-0-1).

A professional fighter since 2009, Stittgen became interested in competing in mixed martial arts after seeing his friend Clay Guida — now a UFC lightweight contender — mix it up with the likes of Josh Thomson and Gilbert Melendez in Strikeforce in 2006. The Illinois native quickly moved up the ranks on the Midwestern circuit, with his only loss coming against fellow UFC fighter Justin Edwards.

Stittgen stepped into the octagon for the first time at UFC 143 against dynamic striker Stephen Thompson at UFC 143. Unfortunately, he never managed to impose his will and suffered a knockout loss in the final minute of the first round.

Most fighters cant’ help but feel the additional pressure of fighting in the UFC for the first time. Stittgen didn’t feel any extra jitters. However, he also didn’t feel like he was at the top of his game that night.

“I didn’t really have too much time to think about it,” Stittgen told ProMMAnow.com when asked whether he was nervous making his UFC debut. “The night before I really didn’t feel like I’d gotten the amount of sleep I needed, and I had some inconsistencies that happened with my corner men. I really just wasn’t myself out there.”

Despite the loss to Thompson, Stittgen has a better idea of what to expect leading up to a UFC bout as he prepares to face Guimaraes.

“It’s good [to have that experience],” he said. “I feel more comfortable, absolutely.”

A champion in the Jungle Fight organization, Guimaraes is best known as a Brazilian Jiu Jitsu black belt. Nevertheless, if it ends up being a ground battle, Stittgen won’t mind.

With five of his seven wins coming via submission, Stittgen has plenty of confidence in his ground game. On top of that, he feels he can outmatch Guimaraes in other aspects.

“Overall I think I excel in all the areas better than he does,” Stittgen said. “I have an extensive wrestling background, a brown belt in Brazilian Jiu Jitsu as well, I’m a practitioner of catch wrestling … I’m ready to rip.”

Despite the loss to Thompson, Stittgen has a better idea of what to expect leading up to a UFC bout as he prepares to face Guimaraes.

“It’s good [to have that experience],” he said. “I feel more comfortable, absolutely.”

So is he hoping to show the mixed martial arts world what he’s really capable of?

“Absolutely,” he said. It’s a simple, one-word answer. But you can tell by the tone of his voice that he’s champing at the bit.

“I’m just looking to bring the war,” Stittgen said. “The Anvil is ready.”