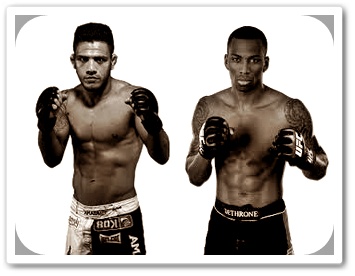 The UFC on FUEL TV 4 event will feature a lightweight fight between exciting fighters Rafael dos Anjos and Anthony Njokuani. Both fighters are probably a couple of wins away from contender status, but two of them have six post-fight award bonuses to their credit. The winner here separates himself from the pack a little and moves up the crowded lightweight ladder. Let’s see how this one breaks down.

Rafael dos Anjos (16-6) comes into this fight off a nice submission win over Kamal Shalorus in May. Dos Anjos has won eight fights via submission and two fights via TKO/KO. He has only been finished once in his career which came via a Mortal Kombat styled uppercut from brawler Jeremy Stephens at UFC 91. The other time he was finished was due to an injury against Clay Guida which I don’t ‘count’. Dos Anjos is very crafty on the ground with his jiu-jitsu, but he has also improved his striking over the years utilizing nice leg kicks and combinations to set up his ground game. He doesn’t really have any real weaknesses in his game to highlight other than he’s not one of the stronger lightweights in the division.

Anthony Njokuani (15-6, 1NC) comes into this fight off a unanimous decision win over John Makdessi at UFC 145. Njokuani has won eight fights via TKO/KO with the rest coming via judges decision. He has no submission wins and is primarily a stud striker with a muay thai based attack. He does a great job of pressuring his opponents with solid footwork and combinations of punches and leg kicks. The knock on Njokuani is that his ground game is severely lacking as he has lost three fights via submission, but he does have fairly good takedown defense.

I’m calling it right now that this fight will be “Fight of the Night”. I think this fight will be fought at an extremely fast pace with Njokuani looking to keep the fight standing the entire time while dos Anjos looks to mix things up and eventually get Njokuani down on the ground. Njokuani will enjoy a sizable reach advantage and should also have a size advantage in this matchup. That shouldn’t be much of a problem for dos Anjos as he fought Gleison Tibau two fights ago, and he’s one of if not the biggest lightweight in the UFC. He lost the fight via split decision but was never able to get Tibau to the mat. He’ll probably experience similar problems against Njokuani, but historically Tibau has much better takedown defense than Njokuani.

I think dos Anjos can find some success striking with leg kicks and look to take advantage of the leg kicks that Njokuani likes to throw. It’s possible that he could look to catch a kick and take Njokuani to the mat. He can also choose to pull guard if he wants. Njokuani will be looking to keep the fight standing at all costs and probably fight from a distance utilizing his long limbs to keep dos Anjos at bay.

I like Njokuani to take this one via decision, or I see dos Anjos getting the submission win.