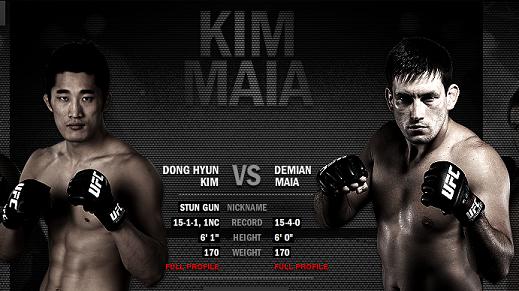 The UFC 148 main card will feature a welterweight bout bout between former number one middleweight contender Demian Maia as he’ll be taking on the always tough Dong Hyun Kim. This will be Maia’s first fight as a welterweight in the UFC as aims to make a run at the welterweight title. Let’s see how this one breaks down.

Dong Hyun Kim (15-1-1, 1NC) comes into this fight off a unanimous decision win over Sean Pierson at UFC 141. It was a nice rebound win coming off his first professional loss in his previous bout, a TKO loss to the now UFC Interim Welterweight Champ Carlos Condit. Kim has won six bouts via TKO/KO and one via submission and has eight wins via decision. He’s a blackbelt in judo and does a good job of taking opponents down and grinding them down. He’s a big welterweight with long arms while being well versed in submissions. The knock on Kim is that his striking is adequate, but not overly impressive considering his size and considerable length for a welterweight.

Demian Maia (15-4) comes into this bout off the unanimous decision loss to Chris Weidman earlier this year. Maia’s original opponent pulled out of the bout and Weidman was replaced about two weeks out from the fight. That fight was probably Maia’s worst performance in the UFC. Maia has won eight fights via submission and two via TKO/KO. He has made great strides in his striking over the years after coming into the UFC as a submission specialist. In fact, he has won the UFC “Submission of the Night” award on four different occasions.

This will be an interesting fight for several reasons. It’ll be interesting to see how Maia performs after cutting down to 170 pounds for the first time. Will Kim be interesting in taking Maia to the ground where he is most dangerous? Will Maia be able to take Kim down if he wanted to impose his will on the ground? Who will win the striking battle?

As I mentioned earlier, Kim will have the reach advantage standing and is the more accurate striker according to Fightmetric. Both fighters are southpaws with Kim having the edge in takedown accuracy while also having better takedown defense. The latter stat may be smoke and mirrors as Maia will give up takedowns just to get the fight to the ground. Maia attempts submissions at double the rate of Kim when the fight hits the ground.

I think Maia has the overall better skillset. I think he’s more dangerous on the ground and I also think he has the edge in power standing. The only thing that concerns me is this being his first time cutting weight to get to 170 pounds. This could play a factor in his cardio later in the fight. If he’s not sharp there, I can see Kim winning a decision if the fight goes to the judges. I think the striking on the feet will be pretty even with the fight being won or lost on the ground. Kim doesn’t offer too much offense when he’s in someone guard which can make him difficult to submit. However, Maia’s guard is really active and he’s adept at sweeps as well. It should be a good tactical battle with Maia having his hand raised in the end.