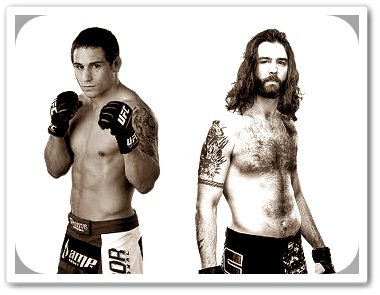 The UFC 148 event will feature a featherweight bout on the main card between former number one contender Chad Mendes as he takes on TUF alum Cody McKenzie. This bout will be a classic wrestler vs. grappler affair as Mendes is known for his wrestling and McKenzie is a submission specialist with the guillotine choke. Let’s see how this one breaks down.

Cody McKenzie (13-2) comes into this bout off a submission win in his last outing in May. McKenzie had lost back to back fights prior to the win, both by rear naked choke submission. McKenzie is a guillotine specialist as 11 of his 13 wins have come with that one submission method.

Chad Mendes (11-1) comes into this bout off a KO loss to UFC Featherweight Champ Jose Aldo at UFC 142. It was the first loss of his professional career. Mendes has two wins via TKO/KO and two wins via submission. He’s mostly known for his wrestling ability which has served him well as he’s able to dictate where his fights take place most of the time.

Mendes is the betting favorite in this fight as he should be. McKenzie’s most logical way of winning this bout is cinching in his patented guillotine choke as Mendes shoots for a takedown, or it’s possible that he could lock it in during a scramble on the ground. The problem is that Mendes is real muscular and basically doesn’t have a neck to choke!

McKenzie will have a huge reach advantage, but it probably won’t be much of a factor as Mendes should have no problems getting him to the ground with his wrestling. I think Mendes wins this fight via decision or stops McKenzie via ground and pound TKO.