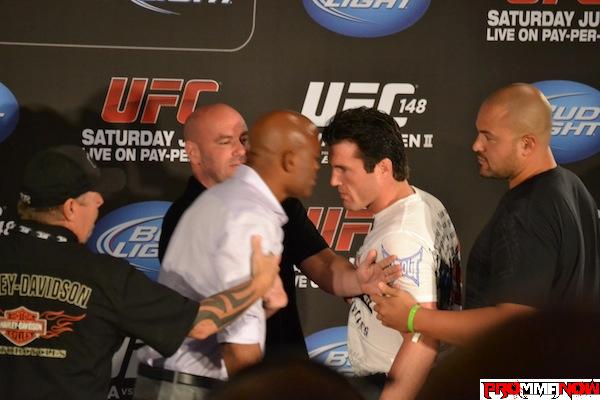 UFC middleweight champion Anderson Silva and his arch-nemesis Chael Sonnen gathered for their final pre-fight press conference today at Lagasse’s Stadium at the Palazzo in Las Vegas prior to their meeting this Saturday at “UFC 148: Sonnen vs. Silva II“.

It didn’t take long for the fireworks to start as the first question asked for Sonnen was if he regretted anything he had said about Anderson and what his response was to those Brazilians who felt he crossed the line or had gone too far with some of his pre-fight rhetoric. Sonnen unleashed:

“Well first off, I offer absolutely zero apologies. And secondly, listen guys, if you are not willing to ‘go too far’, you will never go far enough in life, and I don’t care. I don’t promote fights. I pick fights. I’m like Jon Jones, I sound like Sean Combs, and  I got trombone size stones like John Holmes.”

Anderson shocked the MMA world last week on a UFC 148 conference call when he said he would break all of Sonnen’s teeth, break his arms and legs, and would hurt him so bad it would change the image of the sport.

It was an uncharacteristic outburst from Anderson, who is generally known to be very respectful. He was asked at today’s press conference why he said those things and he stuck to his guns:

“Play time is over. Like I said last week and I’ll say it again, it’s over. Saturday a lot of things are going to change. It’s going to be much different after Saturday.”

Sonnen actually found good success on his feet against Anderson in their first bout. Silva was asked if he was unprepared for Sonnen’s striking and if he feels he will be able to turn that around in the rematch. Silva doesn’t seem to be impressed:

“(laughing) For him to be able to strike with me standing up he would have to be a magician. It’s impossible for him to stand up with me.”

You can watch the entire replay of today’s UFC 148 press conference here: UFC 148: Silva vs. Sonnen 2 presser. Below are photos from the press conference taken by ProMMAnow.com’s Joe Gugelman.

[All photos by Joe Gugelman for ProMMAnow.com – click any image to enlarge]

[All photos by Joe Gugelman for ProMMAnow.com – click any image to enlarge]