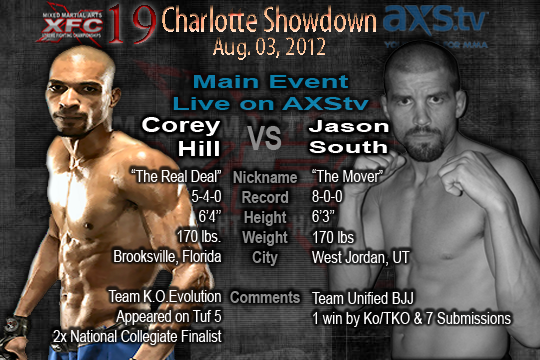 Coming off a highly successful show in Nashville, Tenn., Xtreme Fighting Championships will take their traveling band of warriors to the Grady Cole Center in Charlotte, N.C., for “XFC 19: Charlotte Showdown” on Aug. 3. XFC 19 will air live on the newly branded AXStv (formerly known as HDNet).

XFC 19 will be headlined with a welterweight match-up between The Ultimate Fighter season 5 veteran Corey “The Real Deal” Hill (5-4), of Brookfield, Fla., and undefeated Jason “The Mover” South (8-0), of West Jordan, Utah.

In addition to his stint on the UFC reality show, many fight fans will remember Hill as suffering one of the most gruesome sports injuries in live television history when he broke his leg completely in two with a low kick during a bout with Dale Hartt at “UFC: Fight for the Troops” back in Dec. 2008.

Incidentally, that bout took place in North Carolina. Hopefully “The Real Deal” will not have any flashbacks during his upcoming bout with South which will also take place in “the Tar Heel State”.

The injury sidelined Hill for all of 2009. He made a successful return to action in January 2010 with a unanimous decision win over Jason Trzewieczynski at “Raging Wolf VI”. He fought three more times in 2010, scoring a notable first round submission victory over Kit Cope, and dropping fights to UFC vet Mark Holst and former WEC champ Rob McCullough.

Hill spent the majority of 2011 on the shelf, but in December he moved up to welterweight and at XFC 15 he took on The Ultimate Fighter season 13 veteran Charlie Rader (16-6), who was riding a six fight win streak. With just over a minute left in the first round Hill took the fight to the ground and sunk in a Brabo Choke for the submission win. The XFC signed Hill to a multi-fight contract shortly thereafter.

Hill will have his hands full on Aug. 3rd though as he takes on a fellow who knows a thing or two about the submission game himself. Having never been to a decision in eight pro fights, Jason South has submitted his last seven opponents in a row (and all within the first or second round).

South, who has also been signed to a long-term contract with the XFC, last fought in February when he submitted Tim Ruberg (8-2) with a guillotine choke at “Showdown Fights: Breakout” in Orem, Utah. South commented on his upcoming bout with Hill:

“I’m really excited about facing Corey Hill in Charlotte. Corey is a big name and he is a very tough opponent. I understand this is my time to show people what I can do and I guarantee that when we get to XFC 19 next month you are going to see the best Jason South in that cage. I hope Corey has put in the work too because I expect a war and I look forward to putting on a show for the fans.”

XFC President John Prisco spoke about the South vs. Hill match-up and what it means for the XFC’s 170-pound division:

“The XFC has done a lot of big time main events over the years. But South vs. Hill is going to set the bar for our Welterweight division. Everyone knows Corey Hill and how good he is on the ground. He has reach on everyone on our roster and is arguably the toughest draw for anyone at 170. Jason South has been on a roll and we locked him down to a long-term deal back in the Spring. He has never gone to a decision and with a perfect 8-0 record, he deserves this opportunity to face Corey in the main event. This should be a great fight and I wouldn’t dare make a prediction because both men are that good.”

Stay close to ProMMAnow.com (www.prommanow.com) for more XFC 19 news and announcements. Tickets for XFC 19 are now on sale now at www.beafantickets.com. Visit the XFC website at www.officialxfc.com, and follow them on Twitter at @officialxfc.