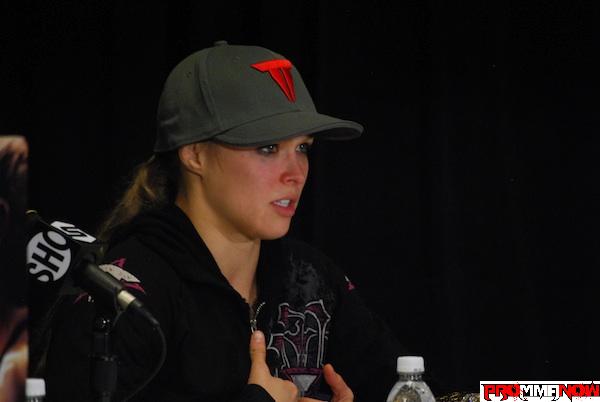 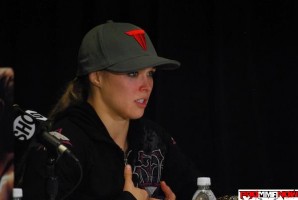 Ronda discussed a number of topics including her upcoming title defense against Sarah Kaufman on Aug. 18 in San Diego:

“The last fight there was a lot of debate about how people thought I wasn’t deserving of the title shot yet because I was so new on the scene. Sarah Kaufman was supposed to be in line for a shot because she was the last person to beat Miesha who was champion at the time. But things worked out the way that they did and I ended up with the title shot and the belt and this girl Sarah is pretty much saying I don’t deserve this belt, that I never deserved the title shot in the first place and it’s rightfully her’s, so of course I’ve got to give her a reason to stop complaining about it.”

Ronda took the Strikeforce 135 pound title from Miesha Tate with a first round armbar back in March. There was a lot of smack talk between the ladies leading up to the bout, there was a lot of hype going into it and Ronda talked about why she thinks so many people were interested in the fight:

“That’s a rare thing these days. Think about it. How many times do you talk to people you just can’t stand and the only thing that stops you from actually throwing down with them is the threat of a lawsuit. This used to be the way that it was a couple decades ago. It’s only recently that we in the United States sue everybody and there’s no way to really resolve arguments anymore. So I think that’s why it kind of took off so much and resonated with every single chick that knows some girl they can’t stand that wishes someone would lock them in the cage with them and be able to settle it. You know? I think that should be allowed with everybody. I think the world would be a happier place. I mean, being an a-hole isn’t illegal, so what can you really do about it? It’s kind of satisfying to see it all resolved.”

Ah… the psychology of relationships with Ronda Rousey…. you think she would make a good mom?  She just might.

Ronda also addressed the possibility of moving up to 145 pounds to face former women’s featherweight champion Cris “Cyborg” Santos. Ronda explained, if that fight is going to happen, the “Cyborg” is coming to her:

Listen to Ronda’s entire interview by pressing play, or press play then download the file to your hard drive for later.