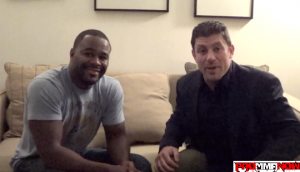 Following the fights on UFC on FX 4 this past weekend, ProMMAnow.com (www.prommanow.com) reporter Dan “The Wolfman” Theodore sat down with former UFC light heavyweight champion “Suga” Rashad Evans for an in-depth discussion about his MMA beginnings and his future with the UFC.

Evans explained his rationale for not dropping to middleweight, but also expressed desire to have a “super fight” with Anderson Silva should the opportunity arise. The guys also recapped the UFC on FX 4 card that saw Evans’ former roommate Gray Maynard defeat Clay Guida via split decision in the main event.

Evans weighed in on the Maynard vs. Guida fight, Guida’s performance, Stout vs. Fisher, and Brian Ebersole and Cub Swanson‘s victories. Evans also talked about the evolution of the Blackzilian Team and his appreciation for his coaches and Glen Robinson of Authentic Sports Management who runs the ship.

2 thoughts on “Exclusive: In-depth with Rashad Evans on his past, future and desire to fight Anderson Silva”