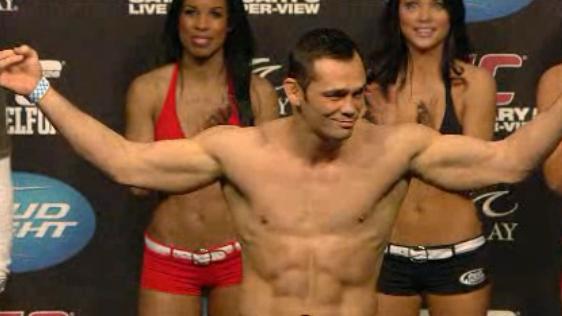 Rich Franklin may have taken the bout with Wanderlei Silva on short notice, but he proved that he was ready for the challenge in hostile territory, surviving a near fight-ending flurry by Silva to win the rematch by unanimous decision in the main event of UFC 147.

After a tentative start, Franklin looked to establish his kicks but was countered effectively by the right hand of Silva. Franklin then found his rhythm, backing Silva up with laser-straight combinations and kicks to the body. Silva managed to land a late head kick, but the story of the first round was Franklin’s ability to land more effectively with his jab and straight punches.

Franklin continued to use his jab early in the second while Silva looked for opportunities to counter as he backed up. Silva then went to his kicks but again Franklin was able to dictate the pace with his jabs and combinations. After backing Silva up against the cage, Franklin went to work with a flurry of strikes that found their way through the defense of Silva. “The Axe Murderer” responded, landing a flurry of right hands that turned the tide. Silva then poured it on, punishing Franklin with a left hook followed by a stiff knee. A right hand shortly after dropped Franklin, and in vintage “The Axe Murderer” fashion, Silva poured on the punishment as time wound down on the round. It looked as though the fight may be stopped, but the resilient Franklin managed to survive to see the third.

Franklin recovered well between rounds, and came out in the third resuming his consistent work with the jab. Franklin mixed in kicks to the body as he looked to take control of the pace of the bout. As the round wore on, Silva did little to return fire as Franklin continued to stay patient and score with his combinations. A late takedown followed by a dose of ground-and-pound marked the end of a dominating third round for Franklin.

The fourth round looked much like the third minus the takedown. Franklin again established his jab, effectively mixing in lead right hands and kicks to the body as Silva again did little to counter the attacks.

Going into the fifth, Franklin again went to work with his jab. Franklin continued to score at will until Silva waved to get the crowd into the action with just over a minute to go in the bout. He then came forward and connected with a flush right hand. Silva continued to come forward, engaging in the pocket with Franklin against the cage. A heated exchange ensued with both men swinging for the fences until the bell sounded. It was an impressive finish by Silva but seemed to be too little too late as the judges worked toward a decision.

When the cards came back, it was Franklin (28-6 MMA, 14-5 UFC) that was awarded the unanimous decision victory with scores of 49-46 across the board.