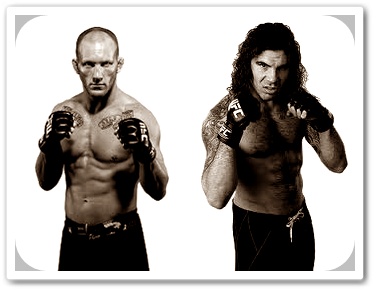 The UFC on FX 4 main event will consist of a lightweight bout between two of the best lightweights in the world. Former number one contender Gray Maynard will take on the guy with wild hair in Clay Guida. It’s an interesting fight in that both are coming off losses in their last fights respectively, yet both are still thought to be on the short road to title contention. Let’s see how this one breaks down.

Clay Guida (29-12) comes into this fight off the unanimous decision loss to Ben Henderson last November, and of course Henderson went on to dethrone Frankie Edgar to become the UFC Lightweight Champ. Guida was riding a four fight winning streak going into that fight was potentially would have received a title shot had he won. Guida is known for his uptempo pace and usually uses his wrestling to take opponents down and outwork them with his pace. He has 15 wins via submission and five wins via TKO/KO. Almost half of his wins in the UFC have come via judges decision.

Gray Maynard 10-1-1, 1NC) comes into this fight after suffering the first loss of his professional MMA career against Frankie Edgar at UFC 136. Maynard was also finished via TKO for the first time in his career in that fight. He has excellent wrestling, good cardio, and knockout power in his hands. Maynard has won two fights via TKO/KO with the rest coming via judges decisions.

This is a pretty easy fight to call. Maynard is the better wrestler and has the ability to stop what Guida is good at. Also, Maynard should be able to take Guida down if he wants and pound on him with Guida offering very little offense off his back. The only advantage if you want to call it that if that Guida doesn’t get tired, but I don’t expect conditioning to be a factor in this fight with Maynard controlling the action even though it’s a five round affair. Maynard will probably look to keep this fight on the feet and punish Guida with power shots, and may look to take Guida down if he needs to.

Guida will need to get this fight to the ground which he will not be able to do consistently, and he will more than likely lose a decision or get finished via TKO for the first time in his career.