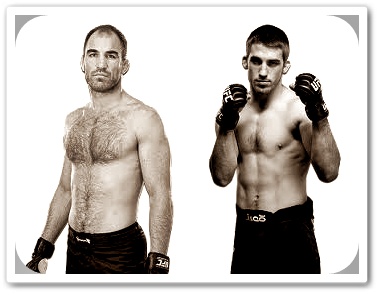 The UFC on FX 4 event will feature a welterweight fight between two guys that have been on a tear over the past few years. Brian Ebersole will take on TJ Waldburger in what should be a fight that moves the winner up the welterweight ladder. Let’s see how this fight breaks down.

Brian Ebersole (49-14-1, 1NC) comes into this fight off a split decision win over Claude Patrick at UFC 140. Ebersole has won his last 10 fights in a row and has finished six of those opponents. Ebersole has won 14 fights via TKO/KO and 20 fights via submission. Interestingly enough, he has lost via submission nine times and never been finished via TKO/KO. Ebersole is a fighter that has good size, is durable, and likes to have grueling fights and break his opponents down.

This should be an interesting fight with Ebersole being submission prone, and Waldburger being knockout prone!  Ebersole obviously has a huge advantage in experience which could play a factor, and it should be noted that many of those submissiono losses came within the first 20 fights of Ebersole’s career. He will be giving up a two inch reach advantage to Waldburger as well, with both fighters having competent striking. However, this fight will come down to whoever can keep the fight on the feet and/or who has the better grappling pedigree.

Ebersole’s last three opponents have all been competent on the ground and he was able to avoid being submitted and/or controlled by those opponents. He has excellent takedown defense as he defends 85% of the takedowns against him according to Fightmetric. Waldburger is successful on 77% of his takedown attempts. If Waldburger needs to score takedowns if he wants to be successful in this fight as Ebersole is a bit more well rounded in his approach.