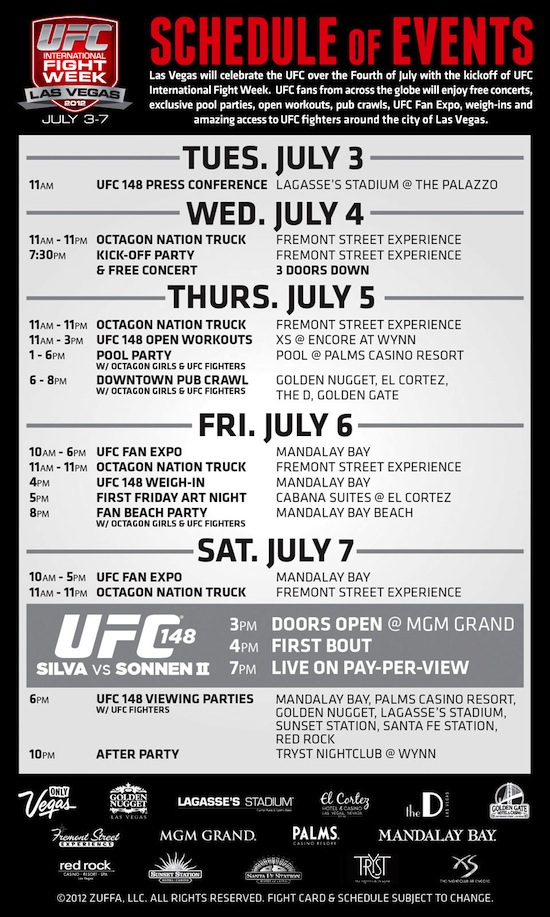 Today the Ultimate Fighting Championship, along with the Las Vegas Convention and Visitors Authority, announced the first annual International Fight Week taking place July 3 through July 7. In addition to various scheduled parties, concerts and events, UFC 148 will take place during that week, along with a two-day UFC Fan Expo.

UFC International Fight Week is being promoted as the largest ever gathering of UFC fighters and stars designed to give fans an unforgettable week-long experience. Some of the events scheduled to take place include a concert by 3 Doors Down, a pool and beach party with the UFC Octagon girls and fighters, a pub crawl, UFC 148 open workouts, UFC 148 weigh-ins and more.

The week will culminate with one of the biggest sporting events of the year, “UFC 148: Silva vs. Sonnen II” at MGM Grand Garden Arena.

Here is what UFC president Dana White had to say about International Fight Week:

“Las Vegas is the UFC’s hometown. This is where our headquarters are, this is where we are from and we’re proud to be contributing to the local economy. The first annual International Fight Week will be awesome, the fans are going to have a fight week experience better than anything they’ve ever had before, and each year we are going to build this thing to the point where every fan on the planet knows they have to come to Vegas for this July fight week at least once in their lives.”

Las Vegas will be swarmed by fight fans that week and the Ultimate Fighting Championship has managed to secure some of the largest venues to host their UFC themed events, including the MGM Grand, Mandalay Bay, the Palazzo, the Wynn, the Palms, the EA Sports Lounge at the Cosmopolitan, Fremont Street, Golden Nugget, Golden Gate, El Cortez and more.

Here is a list featuring some of the events planned for UFC International Fight Week: