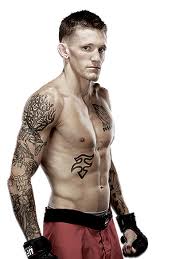 Another injury has hit the UFC for their upcoming event next weekend, Francisco Rivera has withdrawn from his scheduled fight against Ken Stone. A replacement comes in the form of Dustin Pague who will look for his second victory in the space of two weeks.

News of the replacement was announced by the UFC on Friday, they confirmed that both fighters have verbally agreed to the matchup.

UFC on FX 4 takes place on June 22nd at the Revel Casino in Atlantic City, New Jersey. The event will be headlined by lightweight bout between lightweights Gray Maynard and Clay Guida. The main card will air on FX with the prelims airing on Fuel TV and Facebook.

Dustin Pague was last in action at UFC on FX 3 where he defeated Jared Papazian via submission in the first round. The victory over Papazian was a nice way to bounce back from his prior bout at the Ultimate Fighter season 14 Finale where he lost to John Albert via first round TKO. Pague now has the chance to pick up back-to-back wins in the space of two weeks if he can defeat Stone.

Ken Stone will also enter this fight coming off a victory as he was last in action against Donny Walker at UFC Fight Night 25 where he won via submission in the first round. Prior to that win Stone had lost two fights in a row to Eddie Wineland and Scott Jorgensen with both coming via knockout. Stone was expected to fight Mike Easton earlier this year at UFC on FX 1, but he was forced to withdraw due to an injury. A strong performance against Pague will take Stone one step higher in the bantamweight division.