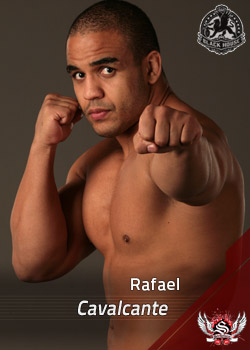 Another fighter has apparently failed a drug test. Former Strikeforce light heavyweight champion Rafael “Feijao” Cavalcante has tested positive for a banned substance according to the California Athletic State Athletic Commission (via MMAFighting).

Cavalcante (12-3) fought and avenged a previous defeat against Mike Kyle, winning via guillotine choke in less than a minute at the “Strikeforce: Barnett vs. Cormier” event. Cavalcante lost to Kyle in his Strikeforce debut via KO just over three years ago.

It’s not clear if this “win” will stand due to the positive drug test. However, Cavalcante has been suspended for one year and will be fined $2,500.

Strikeforce has had a string of high profile fighters test positive for banned substances this year. Former Strikeforce Light Heavyweight Champ King Mo Lawal, and former Strikeforce Women’s 145 pound champion “Cyborg” Santos both have been suspended within the last year.

“I believe in his innocence, and we’re fighting it. We stand behind him. There’s a lot of stuff that doesn’t make sense.”

Stay close to ProMMAnow (www.prommanow.com) for future updates on the story.