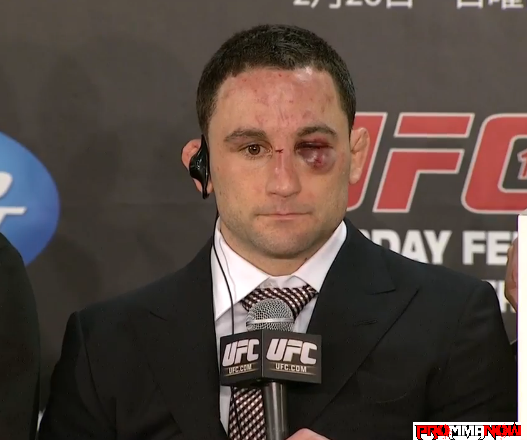 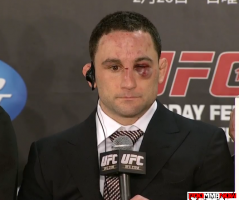 Despite the fact there is only one 155 pound (lightweight) fighter Frankie Edgar (14-2-1) has not beaten in his seven years as a professional fighter, his boss, UFC President Dana White, feels Edgar belongs at 145 pounds (featherweight).

White has voiced this opinion before, and he voiced it again Monday at the UFC 150 press conference in Denver:

“I believe that he [Frankie Edgar] should be at 145 pounds. He doesn’t agree with me. To be honest, the fact that I believe he belongs at 145 pounds and the fact that he’s held the title and beat, if you look at the list of guys he’s beat at 155 pounds, the guy’s an incredible fighter, a tough durable guy, an amazing athlete, and man would he shine at 145 pounds, but he wants to stay at 55.”

That one 155 pound fighter that Edgar has not defeated is of course current UFC lightweight champion Benson Henderson (16-2). The two first fought back in February when Henderson took Edgar’s title via unanimous decision at UFC 144.

The only other loss on Edgar’s record is a decision loss to Gray Maynard back in April 2008. However, following Edgar winning the UFC lightweight title in April 2010 from B.J. Penn and then beating him again in a rematch, he redeemed himself and successfully defended his title by knocking out Maynard in the fourth round at UFC 135 in October 2011.

When Edgar faces Henderson in August it will be the third straight fighter he has rematched. There are those who believe one reason Edgar continues to have close bouts that justify a rematch is because 155 pounds is not his ideal fighting weight.