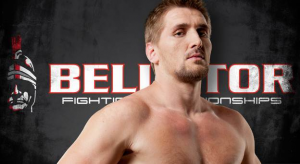 The Bellator Fighting Championships promotion has added another heavyweight to its ever stable of growing fighters. The promotion announced today that four time World Sambo Champion Vitaly Minakov has signed on the dotted line.

Minakov (8-0) is coming off a first round destruction (KO) of UFC veteran Eddie Sanchez just a few days ago in Russia. Minakov has only let one of his fights go to the judges with four submission wins and three TKO/KO wins to his credit. He provided his thoughts on signing with Bellator:

“Becoming a Bellator fighter means that all my hard work in the gym and training has all paid off,” Minakov said. “It means myself and my entire team were working in the right direction, and we did everything right.”

Bellator CEO Bjorn Rebney spoke about his level of excitement on Minakov signing with Bellator:

“There has been tremendous buzz about Vitaly worldwide,” said Bellator Chairman & CEO Bjorn Rebney. “He has an incredible Sambo background and a very solid stand up game.  His potential after just eight fights is very high and we are excited to have him joining Bellator.”

Bellator has snatched up some solid prospects over the past month as well as some grizzled MMA veterans. It’ll be interesting to see how their heavyweight division takes shape later this year. It’s not clear who Minakov will face in his Bellator debut, but be sure to stay close to ProMMAnow (www.prommanow.com) when that news becomes available to us.