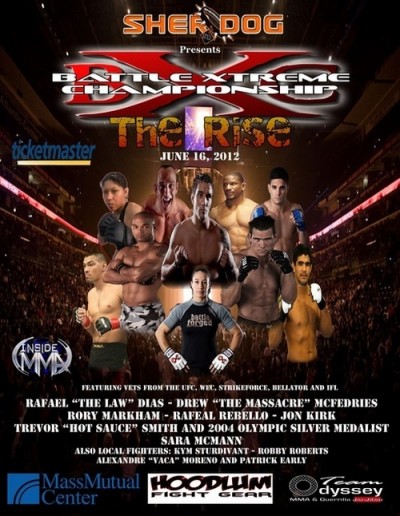 Here is what President Fernando Rivera had to say about the upcoming event:

“It’s an exciting event because BXC brought extremely high-level MMA athletes together to compete in expertly matched bouts, producing exceptional programming and exciting fights. The bar for each fight has been set so high that each fight could be a feature fight with opponents having almost exact fight records.”

The main event will feature American Top Team fighter Raphael “The Law” Dias (16-9-1) against Ran Weathers (16-11). Dias enters this fight coming off a loss to Marlon Sandro at Bellator 58. He lost the fight via arm-triangle submission in the first round. Prior to that defeat Dias had built up a two fight winning streak beating both Chris Ensley and Jay Ellis before scoring a draw against Jang Yong Kim at Pacific Xtreme Combat 24 in June 2011.

Team Jackson fighter Ran Weathers was last in action at a regional MMA event earlier this year against where he wan a unanimous decision over Sean Dyer. The victory over Dyer was much needed after Weathers had hit a slide dropping three straight fights against Jared Downing, Yaotzin Meza and Lawson McClure. Weathers will now look to pick up a second straight win with a good performance on Saturday.

In the co-main event, 2004 Olympic silver-medalist in wrestling, Sara McMann (5-0), will take on Bellator veteran Anita Rodriguez (5-3). McMann last fought in January, scoring a unanimous decision over Japanese veteran Hitomi Akano at ProElite 3 in Hawaii. Rodriguez is coming off a decision loss to Jesica “Evil” Eye at Bellator 66 in April. Just prior to that she won a unanimous decision over Lizbeth Correiro at King of the Cage in January.

“Battle Xtreme Championship: The Rise” is scheduled to stream live on Sherdog.com at 7 p.m. ET/4 p.m. PT this Saturday, June 16.

The fight card for the event is as follows:

Stay close to Pro MMA Now (www.prommanow.com) for all the latest MMA news as it becomes available.