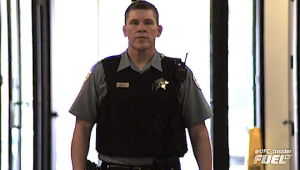 Russow’s only loss took place back in February 2007 when he got submitted by Sergei Kharitonov in Pride 33. Since then he has won 11 straight and on June 23, Russow faces the biggest challenge of his career when he takes on submission master Fabricio Werdum at UFC 147 in Brazil.

Russow has been a police officer on the South side of Chicago for several years now and juggles working full time while also training MMA. Just how far can Russow go working full time and fighting? Tune in June 23 as he tries to take that next step up the UFC heavyweight ladder.