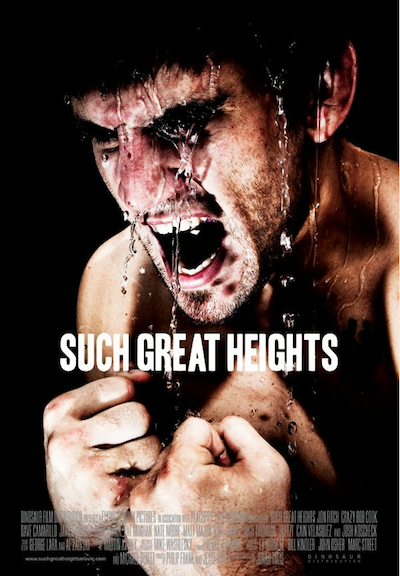 Yesterday we took a look at the Anderson Silva documentary “Like Water”, today we will be reviewing “Such Great Heights”, another MMA documentary that is available for viewing online through Cinema Now. I watched it using my PS3, but you can also watch it on their website (www.cinemanow.com) for only $3.99.

First off, if comparing documentaries between “Like Water” and “Such Great Heights”, the former outshines the latter by quite a long shot in my opinion, which after all what this review is, just my opinion, nothing more or less.

Several factors hurt “Such Great Heights”, not the least of which is the lack of UFC licensed fight footage, which apparently the filmmakers were not granted. It’s interesting to note “Like Water” did not have this problem for whatever reason. There was plenty of UFC fight footage of Anderson Silva in “Like Water” and it added significantly to the film.

There was quite a bit of fight footage of Jon Fitch in “Such Great Heights” but it was all pre-UFC.

The film revolves around Jon Fitch as he prepares for his August 2008 title fight against UFC welterweight champion Georges St-Pierre at UFC 87. That is another factor that hurt the film in my opinion; the storyline is four years old.

Now the good stuff. Here is what the movie does well. We get a great look into the inner workings of one of the greatest fight teams in the world of mixed martial arts at American Kickboxing Academy (AKA) during one particular segment of time.

Some of the characters in the film include, aside from Fitch, “Crazy” Bob Cook, Dave Camarillo, Javier Mendez, Arturo “Huitzi” Mata, Cain Velasquez, Mike Swick, Josh Koscheck, Matt Major, Nate James, Nate Moore, Josh Thomson, Pat Minihan and DeWayne Zinkin. And there are cameos by many other faces fight fans will recognize.

We see a very experienced coaching staff navigating their team through the world of professional MMA, while at the same time helping Fitch prepare for the biggest fight of his career. We get to hear what Fitch was like when he first arrived at the gym and there is some rare early fight footage of the former Purdue wrestling standout.

The coaches talk about Fitch’s progression as a mixed martial artist and we get to hear how important the GSP fight was for the coaches as well as Fitch. At the time AKA had not yet had a UFC champion so this was a huge fight for their team.

I’m sure watching “Like Water” the day before I saw “Such Great Heights” did not help my impression of the movie. As I said, by comparison, there is quite a difference — not in subject matter so much as production I think. Some of the production quality is just lacking.

Because the filmmakers were not granted permission to use UFC fight footage, during Fitch’s fight with GSP, we see clips of old fights mixed with quotes from reporters and GSP about Fitch’s performance.

It has to be difficult to create a film based around a single fight without being able to use any footage of the fight, so I’m not sure exactly what they could have done differently, but that scene in particular to me was pretty hokey.

If you are a Fitch or AKA fan, you will likely really enjoy the movie. If you are an MMA fan you will probably enjoy this more than a rerun of Teen Mom. If you are new to mixed martial arts you might turn this off 20 minutes into the flick.

As I said before, this is just my opinion. You may really enjoy it. Check it out and judge for yourself. This is by no means a knock on Fitch or the guys at AKA — they didn’t make the film. MMAJunkie has posted an interview with the director, Jonah Tulis, that will give you more insight into why there is no UFC fight footage and why it took so long for the film to get released.