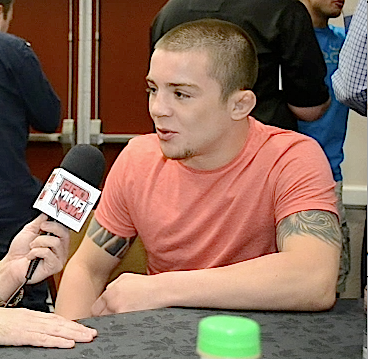 British fighter Andy Ogle‘s (8-1) MMA career looks set to take off after his eventful time on “The Ultimate Fighter: Live“.

With many people saying Andy was their favourite thing about the recent TUF show the likeable character ended up getting himself a spot on a UFC fight card!

After hearing about the upcoming show in Nottingham, England, Andy took it upon himself to approach UFC president Dana White to ask about appearing on the card.

This all happened on an episode of the show when Ogle found out he would be unable to compete on the TUF Live Finale due to not getting medical clearance.

On Monday the UFC made an official announcement confirming that Andy will be facing Akira Corassani (9-3) at UFC on Fuel TV 5 which takes place at the Capital FM Arena on September 29 in Nottingham, England.

PRO MMA NOW: Tickets for the UFC event in Nottingham go on sale this week and your matchup against Akira Corassani was made official. What are your thoughts on the upcoming event? Are you excited about the UFC returning to the U.K.?

ANDY OGLE: I’m just glad to be part of it in all honesty. I think its an entertaining fight which will please anyone that does buy a ticket.

PRO MMA NOW: I am not sure how long you have had to check out your opponent Corassani, but what are your thoughts on him as a fighter? Do you think you match up well?

ANDY OGLE: Like I said in several interviews in the TUF house, I play this game to challenge myself. Akira will give me challenges in this fight and I look forward to meeting them. It’s the UFC…If you don’t want tough fights GO HOME.

PRO MMA NOW: U.K. MMA has grown a lot in recent years, what are your thoughts on how far British MMA has come since the days when Bisping first appeared on season 3 of The Ultimate Fighter?

ANDY OGLE: I’m a little bit disappointed in all honesty. MMA has torn through America and I really want it to do the same here. It’s just taking a little bit longer, but we will get there.

PRO MMA NOW: How does it feel to be back in the UK after being on ‘The Ultimate Fighter’? Is there anything in particular that you miss about the show after returning to normal life?

ANDY OGLE: I miss my friends. We shared a scary experience together which bonded us all. I shared so much with them and I do miss them. I also miss huge bags of beef jerky. I love it but the UK bags are a rip off! I’m thinking of getting my own beef jerky making machine.

PRO MMA NOW: Are you still in contact with many of the guys from the show?

ANDY OGLE: Yes but it can be tough with the time difference. Hopefully I’m on the same card as one or two of the guys in the future. Meet them in the hall and share a bromance.

PRO MMA NOW: I noticed you have a scar on your bottom lip, is there a story behind that?

ANDY OGLE: This is what happens when you don’t let things heal lol. Even the smallest of things can become a burden. Seriously man I have a butt lip.

PRO MMA NOW: Who is your favorite MMA fighter, and why?

ANDY OGLE: Paul Daley cause he has a confidence and swagger about him. He knows he is gonna do the business when he goes to war. He is the man. There are many killers in MMA with their hands but Paul is so confident with it (gun popping hand signs).

Thanks to Andy Ogle for taking the time to speak with us. Follow Andy on Twitter at @thelittleaxe. To stay up-to-date with all the latest MMA news stay close to Pro MMA Now (www.prommanow.com). Make sure you follow us on Twitter @PROMMA and you can follow me personally @JayCeeMMA, thanks!