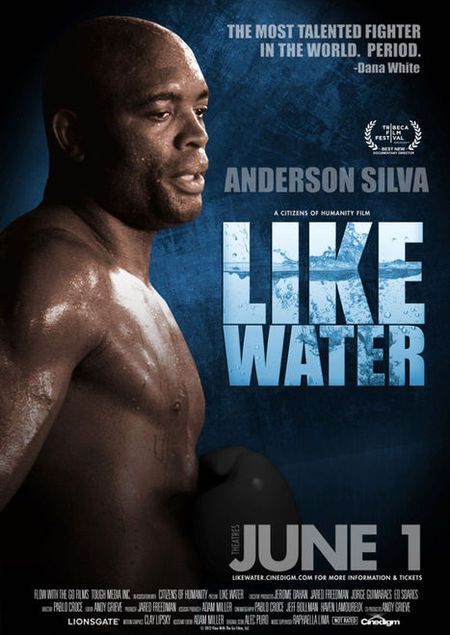 With the magic of streaming video via my PS3 I was able to watch the new Anderson Silva documentary, “Like Water”, last night on Cinema Now.  (You can also watch it on their website at www.cinemanow.com). Cinema Now is basically Best Buy’s version of Netflix.

If you are wondering about the name of the movie, “Like Water”, it comes from the famous Bruce Lee quote:

While on the subject, I like this Bruce Lee quote about water a little more:

“Be like water making its way through cracks. Do not be assertive, but adjust to the object, and you shall find a way round or through it. If nothing within you stays rigid, outward things will disclose themselves.”

Anyway, you get the point, and anyone who is familiar with Anderson “The Spider” Silva can see how Bruce Lee’s philosophy of “be like water” applies to the fluid style of the UFC middleweight champion and the greatest fighter pro mixed martial arts has seen to date.

“Like Water” opens with Silva defending his title against Demian Maia at UFC 112 in April 2010 in Abu Dhabi. We see scenes of what was one of the most bizarre performances in all of MMA history. I remember doing the play-by-play for that fight here at ProMMAnow.com and thinking that we had just witnessed Anderson Silva have a complete mental breakdown inside the Octagon. He was awarded the victory via decision but it was an absurd performance that is hard to describe to anyone who has not seen it.

Afterward viewers get to see the fallout from the fight. We see Silva at the post-fight presser being asked if he felt the fans got their money’s worth and we get to see UFC President Dana White’s reaction, saying he had never been more embarrassed. White also discusses the talk he had with Silva after that fight.

“Like Water” then shifts to the announcement that Anderson Silva’s next title defense will be against Chael Sonnen [at UFC 117 in August 2010]. Sonnen promises Dana White that he will rid the UFC of Silva and the film goes behind-the-scenes into the training camps and fight preparations of both fighters.

There is a scene where Silva is gearing up for a training session and has a conversation with his friend and training partner Lyoto Machida. Silva appears to be discussing the media reaction to his fight with Maia and it provides a rare look into the psychology of “The Spider.”

Silva moves his camp to the U.S. to train at Black House for the fight with Sonnen. We see Anderson training and watching tape on Sonnen and making the media rounds to promote the fight. We see Sonnen also promoting the fight and embarking on the greatest trash talk fight hype campaign pro MMA has ever seen. Silva’s manager Ed Soares said he believes Sonnen has mental problems.

We all know now how Anderson won his fight with Sonnen. “Like Water” shows Anderson training with Antonio Rodrigo Nogueira and he explains the great impact the Nogueira brothers have had on his career. In fact, Anderson reveals there was a point he was ready to retire, but the Nogueira brothers helped him regain his passion for the sport and go on to realize his dream of becoming UFC champion.

Viewers get to see the conversation when Anderson tells Rodrigo Nogueira before the fight that he is going to submit Sonnen. Nogueira tells him,  “No, you are going to knock him out.” But Silva insists to his BJJ coach he will submit Sonnen — it seems to be his way of showing respect to his friend.

One of the most interesting parts of the film is when a protege and house guest of Anderson’s named Dandan has a fight in Portland, Ore., and Anderson goes to corner him. We get to see Anderson play the role of coach/cornerman and he gets very upset when Dadan fails to follow his instructions and loses the decision.

Anderson also takes some heat from Sonnen fans while there in Oregon, and one extra-rowdy Sonnen fan in particular.

Ten days before the fight with Sonnen the UFC holds a media conference call with Anderson and Chael. Anderson is giving one word answers while Chael is in prime form. After the call Ed Soares, Anderson’s manager, gets a call from Dana White who says, “Sometimes it makes me feel like if Anderson loses this fight, it makes me want to cut him. Let him go to Strikeforce, it would be good for him, just get rid of this guy”.

At the same time we hear Anderson talking about the frustration of having to answer the same type of questions over and over and we also hear Soares voice his frustration with Anderson not trying to sell the fight and being caught in the middle between fighter and promoter.

Viewers get an insight into Silva’s mind frame prior to the fight with Sonnen. Not only was he dealing with the backlash of Abu Dhabi, he had spent months training in the U.S., away from his family in Brazil and he was homesick. And to make matters worse, he ended up hurting his rib just a few days prior to the fight. The movie details all of this.

“Like Water” concludes with Anderson getting the submission victory over Sonnen just like he had promised his BJJ coach and friend “Minotauro”. It took him nearly five rounds to do it and he suffered quite a bit in the process, but he won.

As the film closes, Anderson is training in the cage with his son. He is a fighter, a family man, a mystery, a champion. There are many sides to this man and if “Like Water” accomplishes anything, it does a great job at showing the different facets of Anderson’s personality and helps us understand his side of things just a little better.

There is one scene in the movie that probably surprised me more than any other. The fight with Sonnen is coming up and Anderson is required to make a public appearance. He is laying on the hotel room floor throwing a fit and whining that he does not want to go — literally whining like a child. His manager, Ed Soares, is telling him he has to go. Anderson asks why and Ed says, ” Because you signed the contract.”

To see this man considered the toughest man on the planet laying there whining like a child is stunning. But it is the type of honest picture “Like Water” provides for us. The movie takes this one specific point in time between the Maia fight and the Sonnen fight and gives us a brutally honest look into the life of the champion, what he was going through and how he dealt with it. It is often unflattering, but always human.