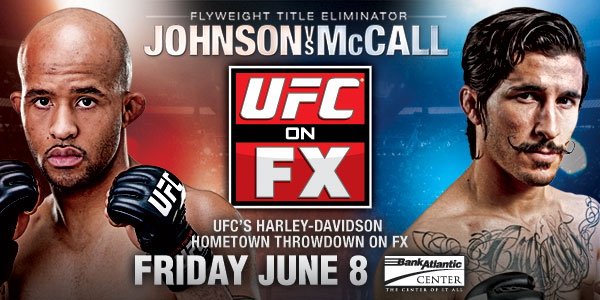 SUNRISE, Fla. – UFC on FX 3 takes place this evening at BankAtlantic Center in Sunrise, Fla., and features a flyweight top contender match-up between Demetrious Johnson vs. Ian McCall in the main event.

ProMMAnow.com will provide live results and play-by-play commentary throughout the evening. In addition to tonight’s fight card results, be sure to check out all our UFC on FX 3 exclusive pre-fight interviews and coverage.

Round 1 – Touch gloves. Shoot for a single by Bernardo, Martinez shrugs him off. Martinez inching forward, throws a few shots as Magalhaes dodges and defends and punches back. Nothing landing. Leg kick from Magalhaes. Martinez with a couple nice counter shots after a left hand from Magalhaes. Martinez backing Magalhaes up and they have a few brief punch exchanges, some punches landing for both but nothing too big. Magalhaes shoots, pulls guard and grabs a leg but Martinez is able to escape to his feet. Leg kick from Martinez. Left hand. Leg kick. Martinez still stalking and Magalhaes playing the counter game. PMN scores the round 10-9 Martinez.

Round 1 – Buddy hurts Magalhaes with a big right hand on the temple. High kick to the body. Magalhaes seems to have recovered from the punches. Leg kick from Magalhaes, overhand right misses. Another right from Roberts scores. High kick from Magalhaes is blocked, he shoots, pushes Roberts to the cage, looking for the single as Roberts gives him some shots to the head. He picks Roberts up, but he lands on his feet. Stays with it and puts Roberts down, he bounces right up and Magalhaes stayaing on him, clinched against the cage. Both these guys are making their debuts in the Octagon. Magalhaes goes for the takedown, Roberts takes his back but lets it go and stands up. Big leg kick from Magalhaes, misses a high kick. Misses a huge left hook as he goes head hunting with powerful shots. Roberts goes for a crane kick to the face but Roberts gets out of the way. Right counter from Magalhaes but Roberts fires back with a right and a leg kick. Big right from Magalhaes backs up Roberts at the bell. PMN scores the round 10-9 Roberts.

Round 1 – Salas misses an overhand right, throws a leg kick that misses and gets countered with a big left to the chin that rocks Salas. Means stays on the attack, lands several knees from the Thai clinch. Salas trying to recover and eats more punches. He shoots in, Means sprawls, holds Salas down with a knee and puts one hand on the back of his head, pushing his face into the canvas and finishes him off with punches to the side of the head until the referee steps in. Very impressive win by “The Dirty Bird”.

Round 1 – Papazian takes the center, lands a counter right after a taking a leg kick. Pague with another leg kick, another. Blocks a right hook. He grabs a Thai clinch as Papazian throws several hooks. Pague trips Papazian to the ground and lands in full mount. Elbow to the face, another to the forehead from Pague. Papazian trying to escape, turns, gives up his back as Pague locks on a body triangle. Now switches to hooks, with his back to the cage, looking for that choke as Papazian defends. Switches back to the body triangle. Pague gets his arm under the chin of Papazian, he squeezes and Mr. Papazian taps out.

Round 1 – Grice stalking, Garcia circling. Grice swings and misses with a one two. Two peas and a biscuit from Garcia. One two from Garcia. Grice gets a takedown, now inside full guard. If you see our pre-fight interview with Garcia he said he would be looking for chain submission if it goes to the ground. Nice couple punches from Grice. He moves Garcia closer to the cage. Grice in half guard now. Grice staying busy with the ground and pound. Grice goes to side mount, then north-south and locks on the north-south choke. Garcia escapes gives up his back briefly, now back on his back with Grice on top in half, now full guard. He postures up with big elbows. Garcia looks for an armbar, Grice pulls out. Big elbows from Grice. Nice punches from Grice, dominating from top position.Three nice punches from Grice. Complete domination and that’s a 10-8 round as I see it.

Round 2 – Grice goes for a takedown. Garcia defends but eats some punches. One two swing from Garcia and Grice uses that as an opening for the takedown and uses a double leg to quickly and powerfully put Garcia on his back. Grice postures up with elbows and punches and moves to half guard. Garcia with butterfly guard. Grice back to half guard. Big shoulder strike from Grice. Punches to the thighs from Grice. Left hand to the face followed by some right elbows. Grice postures up with punches, now elbows and more punches. Grice shutting down the BJJ of Garcia. No chain-submissions here. In fact, he’s only tried one submission. PMN scores the round 10-8 for Grice.

Round 3 – Body kick from Grice. This is certainly not the same Garcia the fans are used to. Garcia swings and misses. Grice shoots and finally Garcia is able to stuff it. Grice lands a one two on the break. Garcia gets countered with a left hook. Garcia with a big left hook and Grice uses that to duck under for a double leg. Perfect timing a la GSP. Grice postures up with a huge right hand, lays inside full guard. Moves to half guard and returns to ground and pound. Garcia somehow gets to his feet, swings and misses, again. Throws a high knee and Grice puts him right back down. I think Garcia may have landed eight punches this whole fight. Grice postures up with punches. PMN scores the round 10-9 and the fight 30-25 for Grice.

Round 1 – Baczynski ducks a high kick. Benoist with a right hand. Baczynski lands a head kick. Big body kick from Benoist. Benoist with a knee to the body and a takedown. Baczynski with full guard, lands a couple elbows off his back. Baczynski starts to make his way to his feet while against the cage. Benoist lands an illegal knee to the face. Ref gives him a little time to recover. He seems okay. Baczynski comes out swinging. Benoist trips to the ground, gets up. He jumps guard, tries to move around to his back and then puts his feet back on the ground. Leg kick from Benoist. Spinning kick from Benois. Failed takedown attempt from Benoist, Baczynski now on top and landing punches. Baczynski in half guard, postures up, eats an up kick and lays inside full guard. Postures back up with a punch or two before the bell. PMN scores the round 10-9 for Seth Baczynski.

Round 2 – Benoist’s corner told him to “focus”. Benoist with a head kick, partially blocked. They trade punches, Baczynski shoots, takes another illegal knee to the head but does not seem affected by it and Benoist just gets another warning. Benoist gets a takedown, now inside full guard. Benoist postures up. Dives in with punches as Baczynski lands an up kick. Benoist lays back inside full guard. Benoist stands over Baczynski, kicks his thighs. Lays back in guard. Benoist tries to pass guard. Baczynski gets to his knees and feet. Jumping knee from Baczynski as Benoist looks for a kimura, lets it go. Baczynski postures up with punches before the bell. PMN scores the round 10-9 for Benoist

Round 3 – Baczynski with the Thai clinch. Now Benoist with the clinch, gets the takedown but Baczynski pops right back up and lands a knee from the clinch and Benoist’s face is a bloody mess. Baczynski ends up on his back with Benoist in full guard working the ground and pound with elbows and punches. Under 2:00 to go. Ref stands them up. Body kick and jumping knee from Benoist; neither land solid. Baczynski tosses Benoist to the ground and lays on some ground and pound from side control until the bell. PMN scores the round 10-9 for Baczynski and the fight 29-28 for Baczynski.

Round 2 – Pierce’s coach wants more ground and pound action when he gets a takedown. Pierce ties up pushing Rocha to the cage. He backs out. One two high kick from Rocha, blocked. Pierce shoots but Rocha defends the takedown. Pierce pushing to the cage. Rocha goes for a leg; possibly a calf slicer. Pierce lands a couple nice punches while Rocha is on his back looking to make something happen. Pierce staying busy with punches but Rocha firing back with punches of his own from bottom. 1:00 to go. Rocha gives up his back, gets to his feet. Pierce pushes him to the cage. Rocha attempts a trip, no dice. A few boos at the bell. PMN scores the round 10-9 Pierce. Rocha’s corner tells him he needs a KO or submission.

Round 3 – Clinch up, Pierce pushes him to the cage. Ref wants action. Left hook from Pierce, shoots, stuffed. Pierce still leaning on Rocha. Ref separates them. Pierce uses a high single to put Rocha on his back. Pierce lands a nice right, body shot. Pierce with several elbows and keeps the ground and pound going until time runs out. PMN scores the round 10-9 and the fight 30-27 for Pierce.

How any judge could give all three rounds to Rocha makes no sense whatsoever.

During Wineland’s post fight interview you can see his brain through the big gash over his left eye.

Round 1 – Excited for this fight maybe more than any other on this card. Overhand right from Pyle, body shot. Neer stalking. Pyle puts Neer on his back, inside his full closed guard. Pyle postures up, left hand to the face. Pyle tries to mount, moves to side control. Butterfly guard from Neer. Neer grabs a heel hook, Pyle breaks out. Incredible technical fight. Neer with full guard. Punches off his back. Throws up a triangle attack. Pyle gets out. Neer goes for an armbar. Pyle pulls out. 2:00 to go. Neert throws up for an armbar again. Pyle is out lands a right coming in. Neer gets to his feet. Grabs a high single. Pyle is off balance. Eats a body shot. Right hand from Pyle. They trade nice punches. Thai clinch from Pyle, lands a couple knees. Neer with some Diaz-esque boxing. Big body shots from Neer looking just like the Diaz boys. Left right from Neer but Mike Pyle lands a huge right and that drops Neer face first to the canvas and he is out. Huge win for Mike Pyle. Wow!  Very very impressive. KO of the night and KO of the Year candidate in my book. Damn that was beautiful! FOTN so far!

Round 1 – Touch gloves. McCall misses a leg kick. Again. Johnson lands one. McCall blocks a high kick, McCall ties him up. Johnson turns him to the cage. Body shots from McCall. Johnson drops levels and puts McCall down. McCall pounds on his back and gets up. Johnson with a punch on the break, leg kick. Front kick. McCall lands a right, leg kick. Johnson drops McCall with a right hand while going backward as McCall came rushing in. He takes McCall’s back as they stand. McCall spins around face to face. Johnson pulls him to the ground. McCall gets up lands a knee. Square up. Trade knees in the clinch. Right hand from Johnson. Leg kick from McCall. Takedown from Johnson, body shots from McCall as he rolls back to his feet. McCall’s face is cut up a bit. Body kick from Johnson. Body kick from Johnson and he grabs McCall’s leg kick at the bell. PMN scores it 10-9 Johnson.