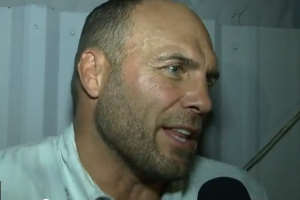 UFC Hall of Famer Randy Couture fought well past the age most fighters ever will. But he is not a fan of Testosterone Replacement Therapy (TRT) and feels there are natural ways you can jump start your body into creating more testosterone as opposed to bringing in an external source, which he says can compound the problems one is already having.

But despite Couture actually picking Frank Mir to defeat “Cigano” at UFC 146, he said he doesn’t want any part of the champ — and who can blame him? After all, Dos Santos is clearly a completely different animal that “The Maine-iac”, not to mention Couture is pushing 50. Couture also discussed The Expendables 2 which is set for release on August 17 and hinted at the possibility of an Expendables 3.