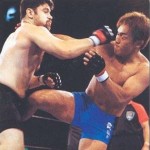 This week, we sent The Wolfman on another Fuel TV reconnaissance mission, this time to the set of UFC Ultimate Insider where he had the prestigious pleasure of sitting down with host Jon Anik.

Wolfman talked with Anik about his background, how he first got involved with MMA and eventually went to work for the UFC. Anik explained his reasons for wanting to work with the UFC and why he feels calling MMA is more of a challenge for him than some other sports might be.

Anik discussed specifically working with UFC Ultimate Insider, getting to work closely with a lot of the fighters and why he thinks the UFC has needed a show like this for a long time. Anik most recently called The Ultimate Fighter Live Finale this past weekend and shared his thoughts on Team Faber’s Mike Chiesa winning the show and the potential of Justin Lawrence.

Wrapping up, Anik will be working again this weekend as he calls the fights with Kenny Florian at “UFC on FX: Johnson vs. McCall” in Florida. Anik gave his thoughts on the flyweight main event match-up between Ian McCall and Demetrious Johnson and the UFC’s 125 pound division in general.