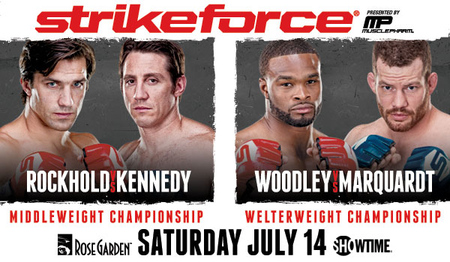 The Strikeforce promotion will be heading to Oregon in July when Strikeforce Middleweight Champion Luke Rockhold steps in to defend his title against former number one contender Tim Kennedy. The event is set for July 11th at the Rose Garden Arena in Portland, Oregon. The co-main event will pit undefeated prospect Tyron Woodley against UFC veteran Nate Marquardt for the vacant Strikeforce Welterweight Title.

Rockhold (9-1) is coming off his demolition of Keith Jardine in his last outing as he ousted the UFC veteran via TKO in the very first round in the first defense of his middleweight title in January. Rockhold became champion last year with a unanimous decision victory over Ronaldo “Jacare” Souza.

Kennedy (14-3) is coming off a unanimous decision win over former EliteXC Middleweight Champion Robbie Lawler. Kennedy has challenged for the Strikeforce Middleweight title once before, coming up just short against the aforementioned Souza in 2010.

Tyron Woodley (10-0) is coming off a unanimous decision win against Jordan Mein in January. He also holds notable victories over Paul Daley and Tarec Saffiedine.

Nate Marquardt (31-10-2) is coming off a long hiatus after being ousted from the UFC in 2011. Marquardt then signed with the UK based BAMMA promotion but never fought for the organization before finally signing with Strikeforce. He last competed in March 2011 at UFC 128, winning a unanimous decision against Dan Miller. This will be his official welterweight debut after fighting almost exclusively as a middleweight throughout his career.

From the Strikeforce press release:

Tickets for STRIKEFORCE®: ROCKHOLD vs. KENNEDY, presented by Musclepharm®, go on sale to the general public on Friday, June 1 at 10 a.m. PT and are priced at $125, $75, $50 and $40. Tickets available at the Rose Quarter Box Office, all participating Safeway/TicketsWest outlets, by calling 877.789.ROSE (7673), or at RoseQuarter.com.

The fight card thus far is as follows:

1 thought on “Strikeforce: ‘Rockhold vs. Kennedy’ set for Portland on July 11th with two title fights”