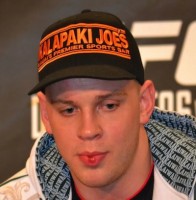 ProMMAnow.com reporter Joe Gugelman caught up with UFC heavyweight Stefan Struve (24-5) following his first round “submission of the night” win over Lavar Johnson (17-6) at UFC 146 this past weekend.

Struve talked about his strategy of jumping guard in the fight, which is not a technique you often see heavyweights implement inside the Octagon. He said it was something he had been practicing recently and felt the timing was right for it.

Struve has now won three fights in a row and five of his last six. As for what’s next, Struve said he wants the next guy on the ladder and hopes to eventually earn that highly-coveted title shot — and hopefully collect a few more bonus checks in the process.