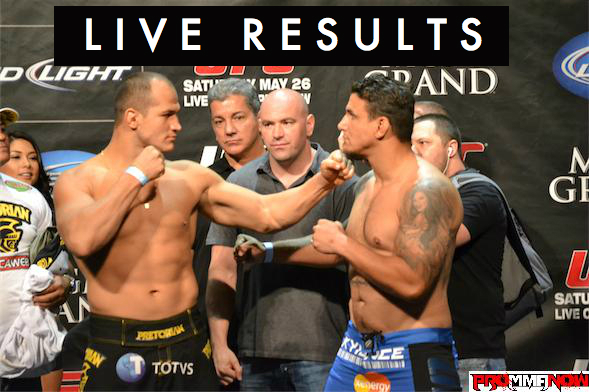 Round 1 – Brittney Palmer lookin hot as always. Brown flashing a jab. Pineda slips to the ground on a high kick, gets up. Right from Brown over the top. Again, connects to the back of the head, left hook connects as well. Pineda staggers Brown with a double jab and a kick but Brown puts him on his back. On top in half guard. Brown almost gets the crucifux position but Pineda sweeps and ends up on top. Butterfly guard from Brown. Brown makes it to his feet. They square up. Big leg kick from Pineda, uppercut and a right. Back elbow and a right from Pineda. Left hook and a right. Left from Pineda, Brown with a front kick. Right hook from Brown. Left jab. Inside leg kick from Pineda, he shoots and Brown hip tosses him to the ground and lands on top in half guard. Brown ends the round landing left hands and Pineda making his way to his feet just as the bell sounds. PMN scores the round 10-9 Brown.

Round 2 – Big right hand and left hook from Brown but Pineda fires back in a gun battle. Pineda shoots for the takedown and puts Brown on his butt. Brown gets to his feet and slams Pineda very hard. Brown in side control but Pineda uses a beautiful sweep standing Brown straight up in the air. Brown makes it to his feet, clinch, knees to the body from Brown, against the cage. More knees from Brown. Big right hand, uppercut, knee. Body shots. PIneda may be hurt. Pineda swings back big, takes a deep breath. They square up in the center. One two three from Pineda, Superman punch, side kick. Nothing landing much. Inside leg kick, spinning backfist. Overhand right. Brown slips on a kick. Pineda tries to shoot but ends up on his back with Brown inside his full guard. Brown with hammerfists and Pineda’s face is bleeding a bit under his left eye. Brown attacking with punches and elbows, staying busy. Brown in full guard. Elbow from his back from Pineda. Big punches from Brown before the bell. Brown was also cut from an elbow. PMN scores the round 10-9 for Brown.

Round 3 – Big leg kick from Pineda. Right hand from Brown. Double jab. Left hook, head kick from Pineda. Brown with a big knee to the body and Pineda is folded to the ground. Brown attacks with punches from half guard. Brown staying busy with ground and pound. Brown tries to move to side control but Pineda does a good job of keeping him in half guard. Brown gets to side control briefly but Pineda recovers full guard. Brown staying busy with punches. Two and a half minutes left. Pineda with pretty good defense blocking most of Brown’s power. Pineda takes Brown’s back with a minute and a half left. Pineda with a body triangle and looking for the choke. Pineda staying busy softening Brown up but time is running out and Brown survives. PMN scores the round 10-9 for Pineda and the fight 29-28 for Brown.

Round 1 – Kingsbury with his pornstar hair and stache. Glover comes out landing punches reddening up Kyle’s face. Knee from Kyle. Big right from Glover. Leg kick from Kyle. Uppercut from Glover drops Kingsbury, he covers up. Glover mounts and unleashes the pain. Kyle tries to hold on. Glover flattens him with his forearm to the throat and keeps punching. Kingsbury trying to do anything here. Glover locks up an arm triangle and Kingsbury taps out. Complete absolute domination. He goes and checks on Kingsbury who is very slow to sit up. What a magnificent performance in what was Teixeira’s UFC debut. That my friends is how you make an entrance to the promotion and serve notice to the light heavyweight division.

Round 1 – Body kick from Volkmann countered with a Sass right. Volkmann gets Sass on his back and is on top in half guard. Volkmann stands up looking to advance position. He lays back down in full guard. Sass throws some elbows off his back, locks up a triangle/armbar and Volkmann taps quickly giving Volkmann just the third loss of his career.

Sass improves to 13-0 and it’s his ninth win by armbar submission.

Round 1 – Miller dancing, eats a left. He has a rising sun design in his hair. Miller rocks CB and locks up a guillotine. Dollaway escapes  and gets a body lock on Miller, drags Miller to the ground and Miller gets up but CB has a body lock. Miller lands a shot. CB lands a stiff jab and Miller fires back. Body kick, left jab. CB with a jab. CB drops Miller with a shot but it looks like his knee may be hurt. It’s wrapped up and looks like it may have given out on him. Miller on his knees and CB is riding his back. CB lands some punches to the side of the head. Miller still on his knees. Elbow from Miller. CB still holding onto Miller and traps his arm behind his back but Miller gets free of that but CB gets full mount. Miller gives up his back and gets to his knees, now to his feet. Miller backs out and lands a punch at the bell. PMN scores the round 10-9 Dollaway.

Round 2 – Miller stalking. They both swing and a big right from Miller hurts Dollaway. Miller rushes him as CB staggers but CB shoots at gets the takedown. Great back and forth fight. CB with a body lock staying on Miller like white on rice. Miller back to his feet as CB pushes and leans on Miller. CB going for a leg, he gets Miller on his back and is on top in half guard. Miller tries to post up but CB flattens him out. The crowd boos the lay and pray. Dollaway lands a couple punches. Miller gets full guard. Miller with some elbows off his back. Nice punch from CB before the bell. PMN scores the round 10-9 for CB.

Round 3 – Left jab from CB as Miller stalks. Right and left from Miller. CB shoots and gets Miller down on his butt with his back to the cage. CB puts him on his back, gets to his knees as CB rides him with a body lock. The crowd boos CB’s style. CB tries to get hooks in from Miller’s back. CB in side control, now riding his back again, one hook in. Two and a half minutes left. Big slam from CB. Rogan says Miller is not fighting like a desperate man, but CB is just controlling him, he can’t do anything. CB drops some heavy hammerfists and is in full back mount. Hammerfists from CB. One minute to go as Miller covers up. Lots of punches from CB. He gets Miller on his back, full mount now. Miller throws up in his arms in frustration. CB throws up his arms in victory as the crowd boos his fighting style.. PMN scores the round 10-9 for CB and the fight 30-27 for CB.

Congratulations to RYU, Varner’s sponsor for this fight!

Round 1 – Superman punch followed by a leg kick from Brandao. Elkins shoots for a single, trips Brandao but  Brandao locks up a kimura and uses it to get on top of Elkins. Now on top inside full gaurd. Elkins attacks with a kimura and Brandao stands up and out. Elkins shoots, stuffed. Nice left from Elkins knocks Brandao back. Jumping knee from Brandao puts Elkins down. Brandao on top in side control, drops some elbows. Brandao tries to mount, he backs up and lets Elkins stand up. Push kick to the knee from Elkins. Right from Elkins. Brandao clips him with a left. Swarms and Elkins goes down to his back. Brandao in side control, stands up, dives in with a big right hand  that connects. One minute to go. Elkins with full guard and punching from his back. Brandao attacking with ground and pound. Big left hand as he stands over Elkins. He stands up again and dives in with a one two scoring. PMN scores the round 10-9 for Brandao.

Round 2 – Greg Jackson in Brandao’s corner. Nice knee from Brandao. Uppercut from Brandao, right hand counter from Elkins. Nice left from Elkins, knee to the body. Backward elbow from Brandao. Brandao slips with a kick and lands on his back. Elkins lays on top inside full guard. Elkins trying to work the ground and pound, landing hammerfists. They scramble and Elkins gets back inside full guard. Elbows from the bottom by Brandao. Elkins in half guard, moves to full mount. He postures up with big punches as Brandao flails. Brandao bucks up and Elkins moves to half guard. PMN scores the round 10-9 for Elkins.

Round 3 – Elkins has a Colossus style cauliflower ear. They trade punches and Elkins gets the takedown. Elkins inside his full guard. He moves to half guard and begins dropping elbows. Brandao recovers full guard. Elkins moves to half guard. Moves to full mount and is working the ground and pound with half the round to go. Nice elbows and punches from Elkins. Big body shots from Elkins. He locks on an arm-in guillotine briefly. Lets it go as Brandao stands up. Elkins tries to drag him down but ends up on the bottom. Brandao dives in with a big punch that scores. Brandao inside full guard. Elkins pulls rubber guard and punches off his back. Brandao with a big right hand before the bell. Great back and forth war. PMN scores the round 10-9 for Elkins and the fight 29-28 for Elkins.

Congrats to RYU apparel for another win as the sponsor of Elkins.

Round 1 – Johnson and Struve tie up against the cage. Johnson leaning on Struve. Struve pulls guard. He throws up his legs for an armbar and this fight is over my friends. Johnson’s arm is hurt as he wrangles in pain. I would now like to divert your attention to our staff picks to see how yours truly called this one.

Round 1 – Herman took this bout on three weeks notice. That could be good or bad. If this gets out of round one I will be amazed. Arianny is now in her seat by the way. See our homepage on why that is a big deal. Two front kicks from Herman. Knee to the body. Front kick. Again. One overhand right from Roy Nelson and this fight is over. Dave Herman goes down. Roy lands one more and that’s it. He landed it right on the jaw and Herman dropped straight down on his butt. Roy folded him in half. See staff picks. Roy “The Ninja” Nelson.

Round 1 – Hold onto your hats friends. Cain puts him on his back right away after catching a kick. Upkick from Silva lands on the jaw. Cain moves to half guard, lands an elbow. Elbow from Cain and Silva is already cut, another elbow. Silva is bleeding badly. It already looks like a murder scene. Bigfoot is having a hard time seeing. Bigfoot goes for a leg and Cain gets free. The ref stops to look at the cut. Bigfoot is shaking his head to get the blood out of his eyes. They let it go after wiping his eyes and checking the cut. They restart the fight where they were on the ground. Cain tees off with punches. Tries to pass to side control but Bigfoot gets half guard. This may be the bloodiest fight I’ve ever seen. Cain pounds on Bigfoot as he turtles. Cain unleashes bombs as Bigfoot tries to cover up but this fight is over as the ref steps in. Calls this man Cain “The Ripper”. This man was on a mission and went in there and brutalized his opponent. Violent! Bigfoot hugs Cain afterward.

Mir said there were too many shots, too fast and too hard. His face is swollen around his eyes pretty badly.