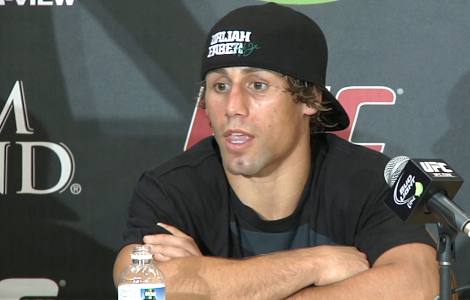 ProMMAnow.com (www.prommanow.com) reporter Joe Gugelman and photographer Krisyn Adamakis are on scene at the MGM Grand Garden Arena for today’s UFC 146 Fight Club Q&A with UFC bantamweight contender and coach of this season’s The Ultimate Fighter Live on FX, Urijah Faber a.k.a. “The California Kid”.

Joe will be bringing you live updates from the Q&A as Faber answers questions and interacts with the fans. And as always, Ms. Adamakis will be snapping award-winning caliber photos* for your viewing pleasure. The Q&A is scheduled to begin at 2 p.m. local time (5 p.m. ET).

* – photos will be added to this post later today.

2:00 p.m. – Waiting for the festivities to begin. Decent turnout of Fight Club members. Expect this place to be fairly packed when the fighters hit the scales.

2:07 p.m. – Goldie is on the stage, hyping the event tomorrow night. He claims that Mir getting boo’ed in his hometown is just messed up. I guess he’s never heard Mir speak before.

2:10 p.m. – Here comes Faber. Video intro package; Faber equates getting punched in the face with drinking. You eventually acquire a taste for it. Tells a story that his mom never had a problem in his first 20 fights when he was the one smashing guys, but once it was Mike Thomas Brown slamming his fists into her baby, “They should change the rules”. Urijah enters to a muzak version of California Love by Tupac & Dre.

2:14 p.m. – He claims that he wasn’t sure about living in Vegas to film TUF, but he’s avoided the craziness, and that Vegas has been overrun with Alpha Males.

2:15 p.m. – Faber confirms that he’ll continue to work with Mark Delagrote in preparation for his July 7th match-up with Renan Barao.

2:17 p.m. – First fan question is what was Faber’s favorite gun to shoot in the coach’s challenge and what he did with the cash. He loved the grenade launcher the best. He says he gave some of the cash to his assistant coaches and the rest is sitting in his safe, ready to fix up his Harley after he wins on July 7th.

2:18 p.m. – Fan asks about questionable call in Mendes/Aldo fight. Urijah claims that TAM doesn’t have much room to complain since Aldo finished the fight, but that it definitely changed the fight. He goes on to say that Aldo was prepared to take a penalty by holding the fence, but the ref didn’t call it since he had gotten boo’ed for making a bad call against a Brazilian earlier in the night.

2:20 p.m. – Urijah answers a young girl’s question about Saturday’s main event by saying that he feels dos Santos has a slight advantage since the fight starts on the feet, but that Mir is always dangerous. He says that JDS’ momentum can play a factor as well, since no one has come close to touching him.

2:22 p.m. – British gentleman has to clarify his question about who would be the “Ultimate Ultimate Fighter” twice. He says that the wrestling mentality is the most important base, but that defensive stand-up is also important. Goldie and Faber joke about Lesnar not acquiring the ability to get hit, and referred back to the video package, claiming that he should have drank more beer and less time on his wife.

2:23 p.m. – Urijah tells the story behind the sleeveless Superman shirt, saying that he came out for his first fight against a huge Mexican with “Pride” tattooed across his stomach in that shirt, and a beanie he found at school on the ground.

2:25 p.m. – Urijah states that Cruz and he will fight in the future. He will continue to get better, while Dominick will likely keep hurting himself because he’s frail. Ouch.

2:27 p.m. – Goldie says that the venue for the July 7th card may have been changed, but he’ll check to make sure that Urijah doesn’t show up at the wrong venue to fight himself.

2:28 p.m. – When asked about which finisher he would use on Cruz if he were a Mortal Kombat character, and he says he’s more of a Street Fighter guy but he’d rip his head off and hold his spine up, ala Scorpion.

2:29 p.m. – When asked about TRT, Urijah claims he hasn’t studied enough to form a final opinion (someone yells out “Cause he’s juicing too”), but his initial response is that steroids is bad for your body and not worth it.

2:31 p.m. – When asked what his biggest challenge will be once he’s a champion again (presumptuous), he says that there’s so many talented guys gunning for you, both known and unknown guys coming up the ranks, but that it won’t be a challenge, and he’s looking forward to it.

2:31 p.m. – A fan says that Jorgensen and Urijah have similar styles, and Barao was able to stifle Jorgenson’s style. Urijah disagrees, claiming that Jorgenson is a guy who comes straight forward, and that the fan should watch both of their fights with Cruz to see the difference.

2:33 p.m. – First question, who will win the co-main Saturday? Cain has his vote. He’s a fellow Pac-10 wrestler. He remembers watching him wrestle in college, and compares him to Gaston from Beauty and the Beast (Nooooo one hits like Gaston, no one flicks like Gaston). Big laugh.

Second question. What kind of interim champion will he be? Like Condit, who views it as a golden ticket to the real title, or will he defend it? Urijah says he never turns away a fight, and will fight as much as possible.

2:34 p.m. – When asked if he was bullied, Faber states he used his leadership in a good way and can’t stand bullies.

2:35 p.m. – Fan says that the rumor is that Bigfoot is getting a title shot if he wins, so is Cain getting the same deal? Goldie announces that when it was originally Overeem vs. JDS, the winner of Cain/Mir was supposed to get the next shot, and that as far as he’s heard, that’s still the deal, but he’d have to check with Dana, since he tends to change his mind, in case you haven’t noticed.

2:37 p.m. – Fan asks what will happens now that TAM has guys representing all these weight classes, including the flyweights. Will they fight? Urijah claims that Dillashaw and him trade victories while training in the gym. He tells a story about Benavidez starting out as an amateur, washing mats, etc, until he finally wanted to know when his time was going to come, and it eventually came. All the guys in TAM will have their time.

2:39 p.m. – How long do you cut weight? Traditional 3-month? Goldie busts into an impromptu Burt impression, claiming that unauthorized use of the scale is prohibited. Faber says that he doesn’t worry too much about it until about 4 weeks out. Right now he’ll be around 156 at the end of the night, he’ll wake up at 153.5, and that he’ll fluctuate around 7-8 pounds leading up to the cut. Three week intense, with the final week being the most intense.

2:41 p.m. – When asked about crazy fan interactions, Urijah says there’s plenty of unstable people out there (Goldie: ..and they all have twitter accounts). Faber says “on blast” for the 15th time today when talking about dealing with twitter guys, and that there’s some crazy women in person, mostly older women, and that he just shakes hands and thanks them for support. Goldie tells a story about battling twitter followers one night, until his daughter finally DMed him, informing him he’s being an asshole. He goes on to talk about one guy who was complimenting him on his wife being a MILF, then questioning if it was still a compliment when he said “You get to have sex with her every night and made a daughter that beautiful”. He wasn’t so sure whether that was still a compliment, or whether he should report spam and block.

2:44 p.m. – Urijah says he doesn’t know much about Daniel Pineda, but he hopes Brown wins since it’s been up and down. The second question was about Michael McDonald. Urijah is very complimentary, telling a story about him coming down and sparring with everyone at TAM all day.

2:46 p.m. – When asked what weight class he would fight if he could choose, he says he’d fight at heavyweight becuase they make the most money, and he’d fight Brock Lesnar. He goes on to say Brock was great for our sport, that he did something a lot of guys like him tried to accomplish by being a national wrestling champion, and that he maybe could have put more time into it, but the short time we had him was great.

2:47 p.m. – Who would he bring in to be part of TAM if he could? Korean Zombie. He didn’t speak any English at all, but he’d be a great guy to have on the team.

2:48 p.m. – What happened with Form Athletics? He sold that company to K-Swiss 8 months after they started it, and it was just stuff he liked to wear, and he hasn’t found another brand he likes wearing as much as that one. K-Swiss had a terrible month in the stock market, and closed a bunch of satellite companies, and Form was a victim of that sweeping measure. In the original deal, he was going to get all the profits in the 3rd year, so K-Swiss wasn’t going to see profits from it again this year, so they used it as a tax write-off.

2:50 p.m. – Question for Mike. Was he approached by WWE a couple years ago, how close was he? About six days. He was honored by it. WWE is the best at what they do, even though they’re different than the UFC. He was a big Hulk fan back in the day and he had family connections to “Mean” Gene back in the day. In the end, he didn’t want to leave the UFC family. He wanted to see where the journey would end up as they hadn’t made it to the big island yet, and he’s glad he stayed on.

2:51 p.m. – Urijah was asked about Chael Sonnen’s antics. Faber said he does it his own way and creates excitement, so what more could you want as a fan? Goldie said that with Chael, you love him or you hate him, but you’ll watch him, which is what counts.

That concludes today’s UFC 146 Fight Club Q&A with Urijah Faber hosted by Mike Goldberg. Thanks for joining us here at ProMMAnow.com (www.prommanow.com). Stay tuned for photos and live updates from the weigh-ins.  We are also hosting a live stream of today’s UFC 146 weigh-ins starting at 7 p.m. ET / 4 p.m. PT (on-demand replay will be available shortly afterward).