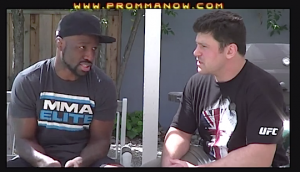 ProMMAnow.com’s resident old-school MMA guru Dan “The Wolfman” Theodore sat down with Muhammed “King Mo” Lawal this past week to talk about his new deal with TNA Impact Wrestling and Bellator Fighting Championships that will allow him to perform as a pro wrestler and compete as a professional mixed martial arts fighter simultaneously.

Mo talks about how the deal came together and how TNA had been wanting to form a partnership within the MMA world for some time. Mo shares his feelings on competing in Bellator’s tournament format and how it is similar to the format used in amateur wrestling.

To prepare for TNA Mo will go learn the pro wrestling ropes at Ohio Valley Wrestling in Louisville. It will not be Mo’s first visit to OVW as he actually tried out for the WWE there in the past. Mo discusses what type of pro wrestling style he plans to use in TNA and the similarity between the entertainment factor in MMA and pro wrestling. Mo also gives a hint at some other changes that might be coming down the pike at TNA.