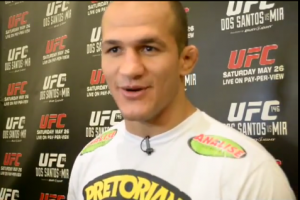 Fans and media members came out to see UFC heavyweight champion Junior Dos Santos at Wednesday’s open workout at the MGM Grand in Las Vegas. Dos Santos did a light workout hitting mitts and working heavy combinations, then took some time to answer questions from reporters.

Dos Santos will put his title on the line against Frank Mir on Saturday in the UFC 146 main event live on Pay-Per-View. Mir replaced Alistair Overeem who withdrew from the bout after testing positive for elevated levels of testosterone in March.

Dos Santos talked about whether or not his game plan changed for Mir and also whether or not he had any motivations for revenge coming into the fight, considering Mir has two wins over Dos Santos’ mentor, “Big Nog”, most recently submitting him via kimura at UFC 140 in December.

Dos Santos talked about Mir’s striking game and whether or not he was at all concerned about it. He also commented on Mir’s ground game, which is obviously his strongest asset. Finally, Dos Santos speaks on how his life has changed since becoming UFC heavyweight champion and if it has turned out to be everything he dreamed  about.