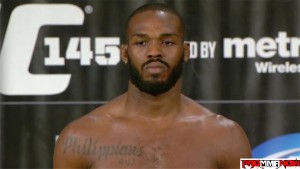 UFC Light Heavyweight Champion Jon Jones was arrested early Saturday morning in Binghamton, New York, on suspicion of DUI. Jones crashed his Bentley into a pole which totaled the vehicle but Jones was not injured.

The news was first reported by TMZ.com:

Law enforcement sources tell TMZ … Jones was involved in an accident at around 5:00 AM in Binghamton, NY. We’re told the car — which Jones crashed into a pole — was totaled and cops arrested Jones on the scene for DUI.

According to our sources, Jones was taken into custody by Broome County Sheriff and bailed out a few hours later … by his mom. Jones is from nearby Ithaca.

Jones (16-1) and his team have confirmed that the arrest did take place, but have decided not to grant interviews at this time as all of the facts are gathered. Jon Jones is scheduled to take on Dan Henderson at UFC 151 in September. It’s not clear if this will impact the scheduled fight at this time. Ross Pearson was arrested last week for the same thing in Las Vegas, but the UFC decided not to remove him from his scheduled bout coming up. Jones last defended his title in April as he defeated former training partner Rashad Evans via unanimous decision at UFC 145.

Here’s a news report from local WBNG channel 12 news in Binghamton on the incident: