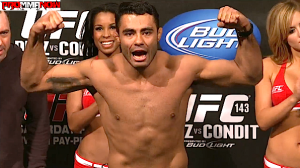 Rafael Natal announced the fight with Andrew Craig on his Twitter page and Penner Vs. DeBlass has been reported by multiple sources.

UFC on Fuel TV 4 will take place on July 11th at the HP Pavilion in San Jose, California. The main card will air on Fuel TV with the prelims expected to air on Facebook. The event will be headlined by a middleweight bout between Mark Munoz and Chris Weidman.

Rafael Natal is currently on a two fight winning streak with victories over Paul Bradley and most recently Michael Kuiper via unanimous decision at UFC 143 earlier this year. Natal joined the UFC in 2010 and currently has a record of (2-1-1) under the Zuffa banner. He lost his promotional debut to Rich Attonito and then followed up with a draw against Jesse Bongfeldt at UFC 124.

26-year-old Andrew Craig is undefeated in his MMA career so far as he was last in action when making his UFC debut in Australia at UFC on FX 2 against Kyle Noke. The UFC newcomer Craig defeated Noke via unanimous decision which was a great result as he fought on short notice replacing an injured Jared Hamman for that fight. The former LFC middleweight champion will now look to further his winning form and climb one step higher up the middleweight ladder.

Canadian fighter Nick Penner enters this fight coming off a loss to Anthony Perosh at UFC on FX 2 losing the fight via TKO in the first round. Penner will now get a chance to bounce back from his disappointing debut and show the UFC what he is really capable of. Prior to joining the UFC, Nick had stacked up an impressive record of (11-1) competing on the regional circuit in Canada.

Ricardo Almeida trained fighter Tom DeBlass has also only competed for the UFC once before and in similar fashion to Penner will be looking to bounce back from a debut loss. DeBlass took on Cyrille Diabaté in his first promotional outing and lost the fight via majority decision. DeBlass enjoyed a seven fight winning streak prior to joining the UFC with all his matches won within the Ring Of Combat promotion based in Atlantic City, NJ.

1 thought on “Rafael Natal vs. Andrew Craig and Nick Penner vs. Tom DeBlass added to UFC on FUEL TV 4”