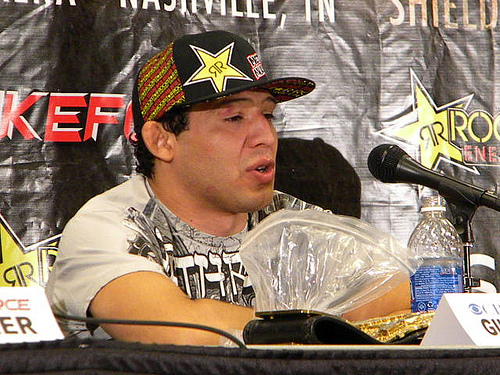 Inside the Cage Radio with host Greg DeLong was back on the ESPN 1450 AM airwaves in Reno this past Thursday. ProMMAnow.com (www.prommanow.com) Founder Jack Bratcher joined Greg to discuss Muhammed “King Mo” Lawal‘s new deal with Spike TV’s TNA Impact Wrestling and Bellator Fighting Championships.

Jack was on last week’s media conference call with King Mo and executives from Spike TV, TNA and Bellator, when they made the official announcement and he was able to report on the details of the former Strikeforce light heavyweight champion’s new venture into pro wrestling and plans to simultaneously compete in pro mixed martial arts with Bellator Fighting Championships.

Greg also welcomed as a guest to the show Strikeforce lightweight champion and one of the top 155 pound MMA fighters on the planet, Gilbert “El Nino” Melendez, who will put his title on the line this coming Saturday in a rubber match with longtime rival Josh “The Punk” Thomson in San Jose, Calif.

In addition to talking about his upcoming bout with Thomson, and he had plenty to say about that, Melendez explained how he would handle the situation if Strikeforce shut down, he moved to the UFC and his great friend, teammate and training partner Nate Diaz was the lightweight champion. It’s a scenario that is a very real possibility.

Nate was guaranteed a title shot following his recent submission win over Jim Miller at UFC on FOX 3 and Melendez shared his thoughts on how he would handle it if the UFC put pressure on them to fight one another. Listen to all this and much more, including all the latest MMA news, on this episode of Inside the Cage Radio!