Chad Griggs drops down, will face Phil Davis at UFC on FOX 4 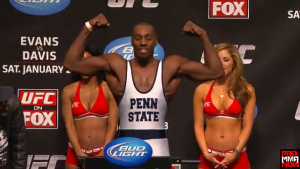 Greeting him for his 205 pound debut will be Phil “Mr. Wonderful” Davis (9-1). The decorated collegiate wrestling stand out saw his undefeated streak ended in his last fight by Rashad Evans at UFC on FOX 2. The bout between Griggs and Davis has been verbally agreed on to take place at UFC on FOX 4 set to take place at the Staples Center in Los Angeles on August 4th.

The following bouts are set for the UFC on FOX 4 card:

2 thoughts on “Chad Griggs drops down, will face Phil Davis at UFC on FOX 4”