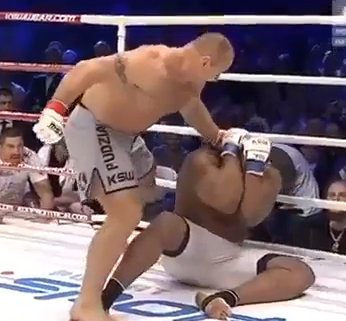 LODZ, Poland — Promoters propped up 38-year-old super heavyweight Bob “The Beast” Sapp (11-12-1) for yet another embarrassing performance against Polish strong man Mariusz Pudzianowski (4-2) at KSW 19 at Atlas Arena in Lodz, Poland on Saturday.

Here are a few interesting facts about Bob Sapp. He has been fighting in professional mixed martial arts for more than a decade. During that time, his fights have gone past the first round exactly twice. Sapp has lost 10 of his last 12 fights in the first round; five by submission, five by knockout (at least he’s well-rounded).

Saturday was no exception. It took Pudzianowski exactly 40 seconds to make Sapp curl up in fetal position and convince the referee it was time to end the pain. Even Wikipedia seems to be fed up with the Sapp charade:

It’s no coincidence Sapp does his fighting outside the U.S., far away from the athletic commissions who are there to protect the fighters from themselves. Notice Sapp has another fight scheduled for this coming weekend in Australia.

Take a look at Pudzianowski’s thrashing of “The Beast” (how about “The Least”) at KSW 19 in the video below. Ultimately Pudz’s cornermen and the referee had to pull him off Sapp. Do you think he was trying to teach Sapp a lesson? And why is Sapp so happy after the fight?