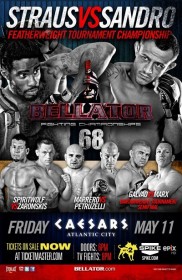 Bellator 68’s main card will air LIVE on MTV2 starting at 8 p.m. ET (5 p.m. PT) and in commercial-free HD on EPIX. Prior to that, the preliminary card, which will feature a host of up-and-coming talent from around the region, will stream LIVE on Spike.com at 7 p.m. ET (4 p.m. PT).

These two first fought in November 2010 in Strikeforce. The bout lasted a total of :06 seconds after an eye poke forced a stoppage.

Round 2 – Waachiim comes out swinging. Head kick misses from Marius. Nice right hand from Waachiim. He swings and misses. Marius lands a big right. Waachiim with an overhand right, then a left. He breathes deep. Big left hand from Marius. Waachiim playing a dangerous game striking with Marius. Head kick attempt from Marius is caught by Spiritwolf, they clinch up, big knee to the chin from Marius. Two more knees from Marius. Waachiim unleashes a barrage of punches, one after the other, his face grimacing like a Native American warrior. Marius goes down and Spiritwolf attacks his prey. From inside full guard Spiritwolf rains down blows looking for the finish. Marius survives and grabs hold of Spiritwolf trying to prevent him from posturing up. Spiritwolf finishes out the round on top landing elbows and punches. PMN scores the round 10-8 for Spiritwolf.

The fight is stopped due to a miniscule cut over one of Spiritwolf’s eyes. It’s not even bleeding at this point and it really is very small. This is absolutely ridiculous. Atlantic City is a fight town so I don’t understand this at all. It makes no sense to me and this is very unfortunate. Their first fight was stopped due to an eye poke in 2010, and now this. Marius is ruled the victor due to the stoppage…it’s even worse after such a great round for Spiritwolf.

They brought out King Mo, along with Bellator CEO Bjorn Rebney, to talk about Mo’s signing with Bellator and TNA Impact Wrestling. For those who still haven’t heard, Mo will be doing pro wrestling with TNA on Spike TV starting this summer, and then in 2013, when Bellator moves to Spike TV, Mo will enter Bellator’s light heavyweight tournament.

Round 1 – Here we go for all the marbles. Big inside leg kick from Sandro. Inside leg kick from Straus hits Sandro’s cup and he goes down. Time is called. He took the full five minutes to recover. He misses an inside leg kick, Straus also misses one. Left hook from Sandro, Straus shoots, pushes Sandro to the cage. Straus gets the takedown, reversing a trip attempt from Sandro. Straus in half guard. Sandro gets up to his feet. Straus with a body lock, gives him some knees to the thighs. Judo trip from Sandro but ends up with Straus on his back. He goes for the choke but Sandro throws him off and they stand up. Left counter from Straus. Two minutes to go. Nice left hand from Straus, shoots for a single, switches legs. Sandro gives him a couple punches to try and get free. Straus with a body lock, knees to the thighs from behind. One minute to go. Straus tries to pick Sandro up for a takedown but no dice. Sandro warned for holding cage. Straus attempts a suplex but can’t get it but drags Sandro forward to the ground. PMN scores the round 10-9 Straus.

Round 2 – Touch gloves. Head kick from Straus blocked. Body kick scores. Right hand, shoots, body lock, presses Sandro to the cage while landing knees to the thighs. Straus backs out and they square up. Uppercut from Sandro, just misses. Tries it again. Step away right hand from Straus, head kick partially blocked. Big leg kick from Straus and a right hand scores. Sandro shoots, stuffed. Left hand from Sandro after missing an uppercut. Nice leg kick from Straus. One minute to go. Sandro with a jumping knee, Straus catches it and goes for a takedown. Presses Sandro to the cage but Sandro pulls away and they square up. They clinch briefly and Sandro shrugs him off. They square up. Knee from Sandro before the bell. PMN scores the round 10-9 Straus.

Round 3 – Clinch, knee from Straus on the break. Leg kick from Straus. Body jab from Straus. Lead left from Sandro, they clinch up. Sandro pressing on Straus against the cage. Knee to the thigh from Sandro, he backs out. Head kick from Straus partially blocked, he shoots. Sandro goes for a single, then body lock from behind, looking for a trip. Sandro with a standing arm triangle. Straus answering the phone. Two minutes to go. Straus seems fine but we’re in a stalemate as Sandro holds the submission attempt. A few boos come forth from the crowd. Straus escapes as Sandro holds a body clinch from behind. Sandro backs out to the center. They square up. Nice right counter jab from Straus. Straus with a body lock from behind and big suplex. He takes Sandro’s back with both hooks in. He’s looking for the choke with 10 seconds left. This fight is over and Straus jumps up as if he has won celebrates. Sandro stays on his knees looking dejected. PMN scores the round 10-9 and the fight 30-27 for Straus.

Daniel Straus is the season six featherweight tournament champion. He won $100,000 and the winner of “Pitbull” and Pat Curran for the title.