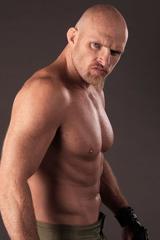 There are multiple reports that a matchup between Keith Jardine and Roger Gracie is being targeted for a July Strikeforce event, this will be Roger Gracie’s debut at middleweight after making the drop from the light-heavyweight division.

The event will air on Showtime with a date and venue also not confirmed at this stage.

Roger Gracie (4-1) suffered his first pro MMA defeat in his most recent fight against Muhammed “King Mo” Lawal at the “Strikeforce World Grand Prix: Barnett vs. Kharitonov” event held in September 2011. Prior to the loss Gracie had built up a four fight winning streak with notable victories over Kevin Randleman and Trevor Prangley. The jiu-jitsu world champion decided to make the drop down to the middleweight division after the knockout loss to Lawal, and he will now look to bounce back with a victory over a UFC veteran in Jardine.

Keith Jardine (17-10-2) last fought for the Strikeforce middleweight championship against Luke Rockhold earlier this year, he lost the bout via knockout in the first round. Jardine is yet to score a victory in the Strikeforce promotion after having recorded a draw against Gegard Mousasi in his Strikeforce debut, the UFC veteran now needs a win to get his career back on track after going (2-6-1) in his last nine fights dating back to 2009.