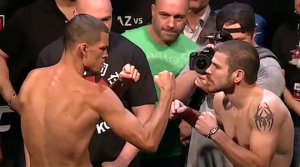 Nate Diaz was able to put Jim Miller away on Saturday night in impressive fashion, and what’s even more impressive is that Miller’s other three losses came against Frankie Edgar, Gray Maynard, and Benson Henderson. In other words, Miller only loses against the best lightweights in the world and Diaz was the only one that has finished him thus far.

Is that what happened on Saturday night?

The knock on Nate and his brother Nick is that they are very skilled fighters that have never been able to overcome opponents with good wrestling and submission defense. Just take a look at some of Nate’s prior losses against fighters like Joe Stevenson and Clay Guida. Those were bouts where Diaz was taken down and controlled without being able to muster much offense. That was probably the consensus thought process going into the fight against Jim Miller on Saturday night. The thinking was that Diaz would not be able to stop Miller from taking him down and that Miller was crafty enough on the ground to keep the percentages of being submitted by Diaz fairly low. I wrote in my fight prediction:

Diaz has the edge in striking but has always been vulnerable to wrestlers. This fight will probably be no different. I expect Miller to make this an ugly fight as he tries to close the distance and take Diaz down. He’ll need to be careful of the active guard of Diaz. However, Miller is well versed in submissions on the ground. I think Miller takes the unanimous decision. If Diaz wins it’ll probably have to be via submission.

So I wasn’t surprised that Diaz won by submission, but I was impressed with how he manhandled Miller in the clinch and basically controlled him the majority of the time. Also, Diaz was able to sweep Miller on the one takedown that Miller did get in the first round. We know that Diaz went up to the welterweight division and experienced marginal success going (2-2), but got rag dolled by Rory MacDonald who has a good chance at being a future champion in that division. However, it has been over two years since Diaz last lost as a lightweight when he lost a split decision against former number one contender Gray Maynard. It appears that Diaz has improved his overall strength and we know that he has improved his jiu-jitsu as he was finally awarded his blackbelt last month from Cesar Gracie. We already knew he could strike as evidence of his two wins prior to the win over Miller.

He’ll face the winner of the Ben Henderson and Frankie Edgar rematch that’ll take place in August, and I think he matches up well with both of them stylistically. At this point, I think you have to consider Diaz an elite lightweight. He can out strike opponents, has excellent cardio, a granite chin, and is equally dangerous on the ground as well.

What are your thoughts on him potentially defeating either Ben Henderson or Frankie Edgar?

5 thoughts on “Is Nate Diaz an elite UFC lightweight?”