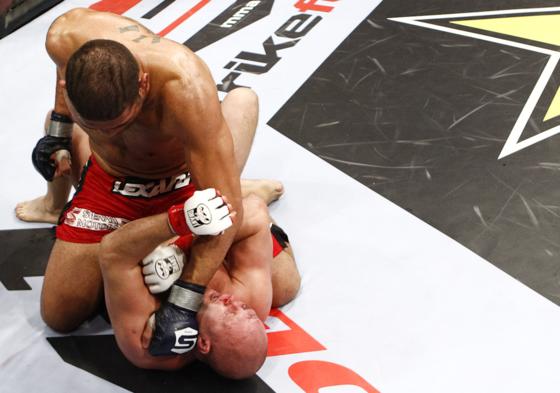 We hope all the ProMMAnow.com (www.prommanow.com) faithful had a Happy Cinco de Mayo and enjoyed UFC on FOX 3.  In the haze of post-tequila soaked revelry and UFC on FOX action you may of woke up on the ground with your head pounding.  In honor of that, we want to present a look back at some of the most ‘brutal ground and pound’ scenes in MMA history. A Cinco de Mayo present, of sorts. Enjoy the ground and pound while you nurse the hangover from pounding down the tequila, Corona or whatever libation you chose to celebrate the day.

Ah, the early days of UFC where referee intervention was far and few between and the only thing you weren’t allowed to do was fishhook or eye gouge. In this bout Scott Morris found himself on the wrong end of some serious ground and pound by way of Smith’s fist, probably for a bit too long due to a seriously delayed reaction time by the ref. This win took Patrick Smith into the semi-finals of UFC 2’s open weight tournament. Smith would eventually make it to the finals, only to fall to Royce Gracie via submission to some ground and pound that he found himself on the wrong end of.

Now commonly referred to as the “H-Bomb”, Dan Henderson had some serious steam to let out after weeks of frustration from being on the receiving end of Michael Bisping’s banter on the set of the Ultimate Fighter US vs UK. As usual, both of the teams coaches met inside the cage at the end of the season and Dan Henderson immortalized himself with one of the most brutal finishes in UFC history.

Fight Promotions “Unarmed Combat” that took place in Gulf Coast Coliseum in Biloxi, Mississippi, was the host of this brutal display of ground and pound where Yvel dispatched Pedro Rizzo in the first round. Pride 25 saw a “super match” when the (at the time) fast rising Fedor Emelianenko fought no. 1 heavyweight in the world Antonio Rodrigo Nogueria for the Pride Heavyweight Championship. Nogueira had submitted six of his seven Pride opponents and it was widely accepted that if you end up in Nogueira’s guard you were on your way to tapping out. Fedor Emelianenko proved otherwise with some crushing ground and pound from “Big Nog’s” guard. Maybe even more impressive was Nogueira’s durability, surviving all the blows from “The Last Emperor”. This fight would eventually go to the judges who all decided in favor of Emelianenko and making him new Pride Heavyweight Champion.

Gary “Big Daddy” Goodridge rendered Herrera completely defenseless by way of crucifix and then unloaded some unholy elbows until referee John McCarthy jumped in to end the barrage. Keith Jardine was riding high into this UFC 84 matchup after winning a decision over Chuck Liddell at UFC 76. Wanderlei Silva sent him crashing down, one hand on the throat the other balled up into a fist style. Coincidentally, Silva was coming into this fight off a loss to Chuck Liddell via decision at UFC 79. Randleman handed Mirko Filipovic a.k.a “Crocop” his second career loss when he faked a takedown to land a monster left hook that dropped the dangerous kick boxer and then unleashed hammer fists galore to end the bout. In their rematch at UFC 134 Shogun Rua send his home country fans into frenzy by finishing Griffin in the first round of the fight which took place in Rio de Janeiro, Brazil.

The accumulation of a nasty feud saw Lesnar unload on  Frank Mir to end the fight in the second round of their UFC Heavyweight Championship bout. A frenzied Lesnar unloaded on UFC’s main sponsor Bud Light after the bout, much to the chagrin of UFC President Dana White. Remember what we said at the top of the article? Back in the old days the ONLY thing not allowed was fish hooking and eye gouging. So Hackney’s method of ground and pound which forced his opponent Joe Son into (high pitched) verbal submission… totally legal.

Shout out to The Underground Forum for help with narrowing down the countless ground and pound finishes in MMA history.

Give us some examples of what you would call the best ground and pound you’ve ever seen in the comments section.