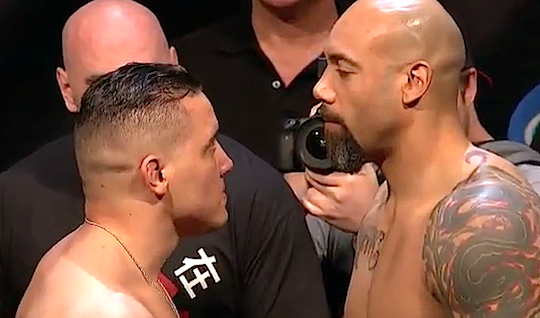 Lavar Johnson and Pat Barry engaged in an early slugfest as expected, but it was Barry that nearly turned the tides with a threatening americana submission attempt.

Johnson survived on the ground, got to his feet, and then poured on a sustained barrage of power punches that finally finished Barry against the cage with less than 30 seconds remaining in the opening round.

Barry came out strong, establishing his powerful leg kicks as Johnson fired back with powerful right hands over the top. Following a big exchange, Johnson backed Barry into the cage and overpowered him with a flurry of big shots. Barry retaliated with a high kick on the break that just missed before shooting in for a takedown. Barry got stuffed initially but kept working, finally securing the fight’s first takedown.

“HD” quickly made his way to full mount, then stepped over to side control looking to isolate Johnson’s arm. After securing it, Barry went to work on an americana attempt which had Johnson grimacing in pain, but the big man fought off the attempt and made his way back to his feet.

Once there, Barry snapped off another powerful kick, but it was a kick from Johnson that triggered the final sequence of action. The kick staggered Barry as he backed up to the cage. Johnson pounced, unloading a steady dose of uppercuts and hooks, forcing Barry to cover up to survive. Johnson continued to pour on the punishment, connecting with a flush shot that dropped Barry to the canvas, forcing the referee to step in and stop the action.