Bellator 67 results: Chandler, Baker, and Ford are all winners 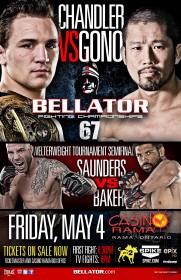 Orillia, Ontario. (May 4, 2012) — Reigning Bellator Lightweight World Champion Michael Chandler proved once again how dangerous he is in the cage – and this time he needed only 56 seconds to make his point as the undefeated mixed martial artist crushed proven MMA veteran Akihiro Gono with a big right hand and pounced the seasoned Japanese fighter for the first-round TKO victory Friday night in front of a packed house at Casino Rama in Orillia, Ontario, Canada LIVE on MTV2 and in HD on EPIX. Bryan Baker had a big night as well as the red-hot welterweight now moves onto the finals of the Bellator Season 6 Welterweight Tournament with a win against Ben “Killa B” Saunders. Ryan Ford was able to score a huge comeback victory over Bellator veteran Luis “Sapo” Santos, and Damian Grabowski picked up a dominant victory in the night’s other televised bout.

“It was another spectacular night here at Casino Rama,” Bellator Chairman & CEO Bjorn Rebney said. “The Canadian fans never disappoint and neither does Michael Chandler. With the Fight of the Year submission victory over Eddie Alvarez and now to put away a veteran such as Akihiro Gono in less than one minute, we’re witnessing something truly special. I also can’t say enough about Bryan Baker and Ryan Ford’s performances.”

For undefeated Bellator Lightweight World Champion Michael Chandler, Friday night was an opportunity to build off his epic fight of the year bout with Eddie Alvarez last season and solidify himself as one of the greatest lightweight fighters in the world. In order to do that, he had to take out 18-year MMA veteran, Akihiro Gono (32-18). Almost immediately, Chandler began to stalk Gono, forcing the Japanese fighter to back pedal. As he pushed forward, Chandler landed a brutal straight right hand that put Gono on the mat. Chandler quickly jumped on top of Gono and unleashed vicious strikes that forced the referee stoppage at 56 seconds into the first round.

“I’ve got a lot of work to do, by no means am I complacent,” said Chandler. “I promise you I’m going to be the best lightweight in the world.”

With the TKO win, reigning Bellator Lightweight World Champion Michael Chandler improved his record to 10-0 and will meet the winner of the Rick Hawn vs. Brent Weedman finals match that will take place later this year.

Ben Saunders and Bryan Baker have both been vocal about their disappointment with their previous performances in the quarterfinal round of the Bellator Season 6 Welterweight Tournament. Both men were looking to come out and redeem themselves by putting on a dominant performance in front of the fans at Casino Rama. Through three rounds of back-and-forth action, both fighters displayed the crafty skills that have made them fan favorites when competing in the Bellator cage. Saunders, attempted multiple submissions in the first round, nearly finishing a deep triangle, and Baker stifled Saunders’ famous Muay Thai attack on the feet and implemented his devastating ground and pound through the final two rounds. When the final bell sounded, all three judges scored the fight unanimously for Bryan Baker.

“Each fight I’m building more and more,” Baker said. “I’m going to do my homework and be even more ready next time.”

With the unanimous decision victory, Bryan Baker earned the 18th win of his career and will now move to the final round of the Bellator Season 6 Welterweight Tournament against the winner of the Karl Amoussou vs. David Rickels matchup later this season. Ben Saunders drops to 13-5-2.

There is no doubt that near-perfect Polish Heavyweight Damian Grabowski was looking to erase the memory of his last performance under the Bellator banner, a decision loss in the Bellator Season 3 Heavyweight Tournament semifinals to eventual champion, Cole Konrad. With a combined 21 first round finishes between him and his opponent, Dave Huckaba, many in attendance weren’t expecting a long fight. Instead, both fighters put on a back-and-forth affair that was highlighted by takedowns from Grabowski and counter-strikes from Huckaba. After three rounds, both fighters had to settle for a decision. All three judges scored the fight 29-28 in favor for Damian Grabowski. With the unanimous decision victory, Damian Grabowski moves to 16-1 as a professional while Dave Huckaba, in a losing effort, drops to 17-5 in his Bellator debut.

In a fight that had all the ingredients of being an explosive display of excitement, Bellator newcomer Ryan “The Real Deal” Ford and opponent Luis “Sapo” Santos were expected to bring fireworks when they squared off in front of an electric Canadian crowd. With a combined 52 finishes in 79 fights, both fighters are known for leaving nothing in the hands of the judges. Living up to its billing, the first round featured a head kick by Santos that put Ford on his back, struggling to get to his feet. Though obviously hurt, Ford was able to hang on until the end of the round. In the second, the tables turned. After landing a vicious knee to the head of Santos, Ford was able to drop the Brazilian and finish him off with strikes until the referee stepped in to stop the fight at 1:24 of the second round.

With the TKO victory, Ryan Ford improves his record to 18-4 while Luis Santos falls to a respectable 50-8 in his professional career.