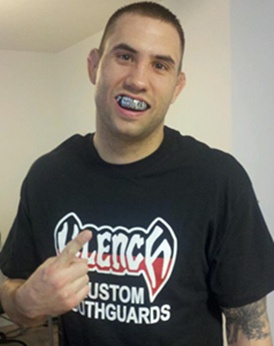 Where to begin? This last year has been quite a journey for me and my career in MMA.  I have moved from South Carolina, to Alabama for six months, then on to New Jersey.  Now after over a year I step back in the cage against another Bellator tournament veteran.  This time it will be in Bellator, at Caesars Palace, in Atlantic City.  Man, kind of hard to take in…

This will be my first fight at 155lbs ever, and on one of the biggest stages in MMA.  I am fighting Marcin Held, a tough jiu-jitsu guy from Poland. I feel that the toughest part of this fight will be dealing with his unorthodox leg lock attacks that he showed against Phillipe Nover in his last fight.

I am very confident for this fight since I’m now living in New Jersey and training at Pellegrino MMA with Kurt Pellegrino and several tough guys that have fought in the UFC, Strikeforce, WEC, Bellator, and a ton of other regional shows. We have a ton of really good jiu-jitsu guys that have helped me prepare for this fight.  I couldn’t tell you the last time I have trained with a white belt.

I have always had to just put in a lot of hard work and push myself to the limits to prepare for fights due to the lack of training partners in South Carolina.  I had a few guys like Josh Eagans and Ferdinando Acerra to push me and help me along the way but that was about it.  Now I have so many good guys around me at Pellegrino’s it will be hard to compete with me anywhere the fight goes.

Now this will be my first time at 155lbs and I am about 170lbs right now, but with my structured diet in the coming week for cutting the last 15lbs, I feel confident it won’t be a problem. I started this weight cut at 183lbs, so after I weigh in I will have cut 28lbs over about a 3-4 month span.

Also, I finally have Kurt that has been doing this on the biggest stage around for years and has this down, so I know I can’t go wrong.  The hardest part about living in Jersey around a bunch of Italians, is all the great pizza places, and I love pizza!  I have been very good with my diet and have only had a few cheat days, and I can’t remember the last time I had pizza.

For the first time in my career, I am finally doing everything like a pro. Thanks to my sponsors Future Legend, Klench Kustom Mouthguards, EPO Boost, E Street Bagels, Stract International, TRX suspension trainers, and Dead Serious Fight Gear.  Also, go and support Clifton R Lewis Good Life Foundation, they help make dreams come true and help families with Muscular Dystrophy, I will have their logo on my shorts for Bellator 68.  Lastly don’t forget to follow me on twitter @derrickakadk.

Be sure to check Pro MMA Now (www.prommanow.com) next week as I detail my journey to the Bellator Fighting Championships.

“The Derrick Kennington Experiment” will be an ongoing weekly ProMMAnow.com blog series written by a former South Carolina standout that has relocated to train with UFC veteran Kurt Pellegrino in New Jersey. Kennington will make his debut for Bellator Fighting Championships at Bellator 68 on May 11th. “The Derrick Kennington Experiment” is part of our ongoing series of exclusive content written by individuals involved in the mixed martial arts industry.