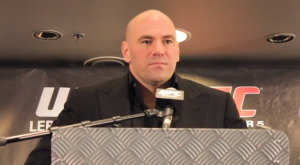 Rampage Jackson has been vocal over the past few months regarding his feelings towards UFC’s treatment towards him. The former light heavyweight champion has taken issue with UFC’s match making and a perceived “lack of respect”.

Dana White was asked about Rampage’s recent verbal tirade towards the company and the UFC President fired back at Rampage, telling the media on hand at UFC on FOX 3’s press conference:

“If he’s unhappy with us, doesn’t like us, and doesn’t want to be with us anymore, then the feeling is mutual. I’ll have a conversation with Rampage and think we’re cool and then I’ll read other stuff. Rampage is obviously not happy with the UFC.”

Dana White went on to talk about how many times UFC has backed Rampage, most recently paying for Jackson’s double knee surgery. Most famously, UFC president bailed Rampage Jackson out of jail after he was arrested for felony evading, reckless driving and hit and run. White expressed how many time’s he has helped out the troubled fighter:

“You want to talk about a guy we went to bat for. We’ve gone to bat for him many times. I feel like [expletive] Derek Jeter when it comes to Rampage. We’ve never screwed anybody over, including Rampage.”

Jackson has one more fight left on his contract, which he appears to be happy to fulfill. However it may be up in jeopardy if Jackson continues to talk about how badly he wants out of the UFC. As Dana White ended his comments by sending a message to Jackson:

No big deal brother, (if) you don’t want to be here anymore.”

Quinton ‘Rampage’ Jackson was slated to take on Shogun Rua in a much anticipated rematch before Rampage’s decision on knee surgery ended the chances of the matchup going fourth. Stay tuned to ProMMAnow.com for further updates in the Jackson/UFC ordeal.