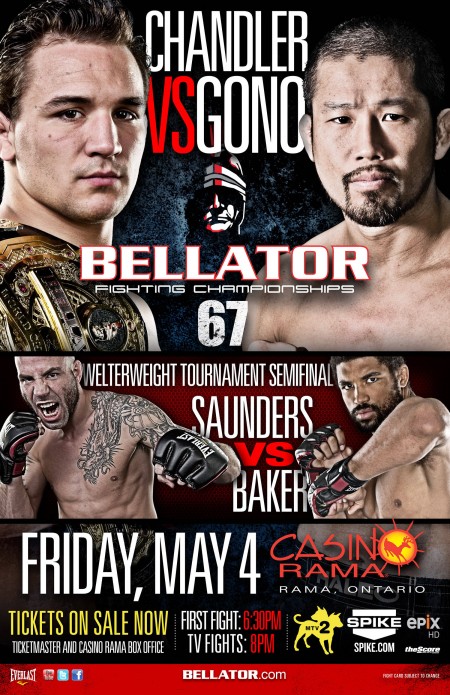 Round 1 – Baker feinting to start. Saunders lands his first kick then a razor sharp straight right hand. Baker comes forward with his wild style but misses with his kicks. Saunders clinches and lands some big knees up the middle. Baker has had enough of that and takes the fight to the mat. Saunders back to his feet now but Baker is still looking to stay inside and look for another takedown. It looks like Baker is bleeding. Saunders with another knee. Baker with a takedown attempt and Saunders goes for a flying triangle. Baker pulls free and then goes for a single. Baker stays persistent and earns a takedown. Saunders is busy off his back and swings his hips into a crazy-quick triangle attempt. He transitions to the armbar but Baker is out again. He’s on top posturing now. He lands several right hands from the top with Saunders on the cage. Saunders kicks off and stands. Baker immediately re-shoots and puts Saunders on the cage. Under a minute to go now. Baker works Saunders to the mat but gives up an arm. Saunders grabs it and looks for a kimura. Baker takes the back of Saunders and gets both hooks in. He lands a couple of punches as the bell sounds. PMN scores Round 1 for Baker.

Round 2 – Kick by Baker to start the second. Saunders takes the center of the cage and starts to stalk Baker. He throws a couple of wild punches as Baker circles out of trouble. One-two from Baker. Saunders to the body now. Big left hand from Baker. He then follows up with a kick. Baker fires off and lands a looping three-punch flurry. Saunders smiles then comes forward and clinches. Baker turns and puts Saunders on the cage. Saunders fights off the takedown, then gets one of his own. Baker pops back up and again looks to take the fight to the mat. Saunders looks for the kimura again, then switches to a guillotine. Baker pops his head out and launches a couple of uppercuts. Saunders counters with knees up the middle. Nice right hand and knee from Saunders. Baker snaps his jab out there and shoots. He looks like he’s wearing down now. 1:30 to go. Baker with an outside trip and he’s back on top again. The takedowns have been the difference so far for Baker. Hammerfists from the top. Saunders throws back but he’s losing on his back. He shrimps out to create space but Baker stays busy and moves to side control. Baker looking for the crucifix. He partially gets it and lands a flurry of rights at the bell. Round 2 also goes to Baker.

Round 3 – Jab Baker. He’s switching stances now. Inside leg kick by Baker but he looks pretty tired. Saunders with a flurry. Knee to the grill by Saunders. Baker closes and puts Saunders on the cage. He can’t afford to be on his back again. Baker still looking for a takedown. Saunders is fighting it off but gives up another takedown. Baker back on top. This has been the story of the fight so far. Saunders throws his legs up looking for an armbar. Baker has shown good sub defense so far. Baker postures out of trouble and lands a couple of left hands. Saunders is scrambling but Baker is maintaining top control with less than two minutes to go. Baker postures and lands a right hand. Saunders rolls, giving up his back. Saunders stands with Baker draped on his back. Baker locks his hands and gets the suplex. He’s dominating this round. Baker with right hands. Saunders looks to roll, but Baker stays on top. He stands and throws a couple of wild kicks. The bell has sounded. PMN scores the final round 10-9 for Baker, and the bout also for him – 30-27.

Round 1 – Gono looks super relaxed. Chandler changes levels and lands to the body. Chandler feinting his jab now. Gono staying patient looking to counter as Chandler keeps faking. Chandler comes forward with a combo then uncorks a megaton right hand down the middle that floors Gono. He follows up with a flurry of punches, about 10 in all and the referee intervenes. Very, very impressive!

4 thoughts on “Bellator 67 results and play-by-play”