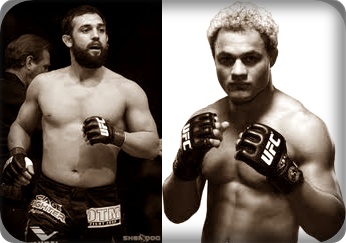 The UFC on FOX 3 co-main event will feature a welterweight bout between two highly ranked fighters in Johny Hendricks and Josh Koscheck. There are tons on line including a title shot for Hendricks should he be victorious on Saturday night. Koscheck is looking to avoid being the gatekeeper the division while proving that he’s still one of the elite welterweights as he creeps up on 35 years of age. Let’s see how this one breaks down.

Johny Hendricks (12-1) comes into this fight off of the highlight reel KO of then number two ranked welterweight Jon Fitch at UFC 141. Hendricks is a former two time national wrestling champion and a four time All-American at Oklahoma State University. He has won seven fights via TKO/KO and one fight via submission. The lone loss on his record came against the gritty Rick Story at the TUF 12 Finale in 2010, and he has since won three consecutive fights.

Josh Koscheck (17-5) comes into this fight off of a somewhat controversial split decision win over Mike Pierce at UFC 143. I had Pierce edging Koscheck in that fight. Koscheck is a former national wrestling champion and was also a four time All-American in college. Koscheck has won five fights via TKO/KO and five fights via submission. He has won back to back fights since losing this title bout against Georges St. Pierre at UFC 124.

Those odds are pretty much spot on as both fighters have similar attributes and you can make a case for both fighters winning this one.

I think both fighters have fight ending power in their hands, but I think Hendricks has the edge there plus he’s a southpaw. According to Fightmetric, Hendricks is the more accurate striker by far and attempts more takedowns than Koscheck.

That’s the thing with Koscheck as he has really become a one dimensional fighter over the years. He has instead become a headhunter looking for the knockout and he likes to wing huge overhand right hands that rarely land. He’ll need to mix his wrestling and his striking to beat Hendricks in this one. It also takes Koscheck a while to get going as evident in the Matt Hughes fight. Hughes out struck Koscheck fairly easily throughout the first round before Koscheck finally landed a hay-maker that stunned the former champion. He can’t afford to do that against Hendricks.

Hendricks needs to stay poised in this fight and not over-commit on his punches and put himself in bad positions. A smart Koscheck will look for these openings at take him down as Hendrick’s MMA wrestling isn’t on par with what he did in college at this point in my opinion. This is where the experience of Koscheck could come into play as he has fought the best of the best in the division.

I think Hendricks gets it done on Saturday night in what will probably be a very close fight if he goes to the judges. Hendricks via split decision.