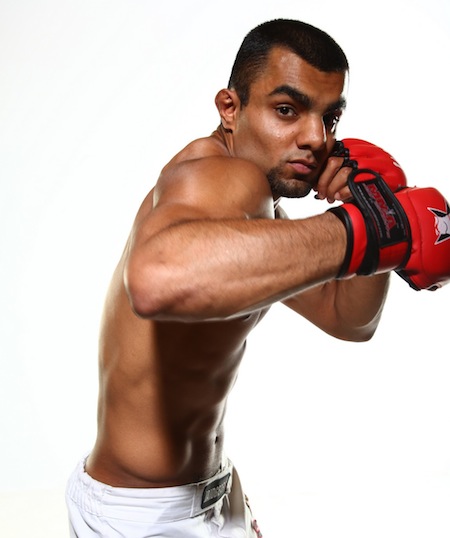 At the age of 21 many a person has decided to reinvigorate their lives by doing something crazy. Some get a tattoo, some get a new hairstyle. Gary Mangat decided to become an MMA fighter.

There was no elite sporting background behind Mangat’s decision, neither was there any need to apply himself to avoid falling foul of the law. It was nothing other than a random impulse and stubborn determination that led Mangat to a decision that has changed his entire life.

“I had moved from Williams Lake, a small town in northern Vancouver, to Surrey so I could study accounting. One day I was sitting in a bar with some friends and there was an MMA fight on a TV screen. I turned to my friends and said, ‘I would be good at that’. They all laughed. So right there and then, I decided it was time for me to prove to people and to myself too, that I could do whatever I put my mind to.”

And it is the astute student’s mind that has proven to be his greatest weapon in what has been an astounding and astronomical rise in the unforgiving world of MMA. Most surprised to see his exceptional progress as a fighter will be anyone that knew Mangat from his school days.

“I was a shy, chubby kid at school. You were more likely to find me in the library with a book then out on the field doing any type of sport. I was kind of picked on. But I was always good at analyzing things. I have this mindset where I can just focus and simplify things. It was why I was good at studying, so I just took this approach into MMA. I break everything down, so if I’m being taught a jab, I just simplify its movements, making it easier for me to take it in. That has been my whole approach to MMA and I use it to just try and learn and improve everyday.”

This cerebral approach to MMA has so far been working wonders for him. After a stellar amateur career that saw him become the Battlefield featherweight champion, Mangat entered the professional ranks in 2011. Rather than a hindrance, Mangat sees his pre-MMA lack of athletic experience as a genuine reason as to why he has adapted to the sport so well and become rated as one of Canada’s and India’s best MMA prospects, having only taken up the sport four years ago.

“I am coming through on this new wave, part of the generation that has learnt nothing but MMA from the beginning. It helps because I don’t have anything to fall back on, I don’t look to run to my jiu-jitsu or my striking in a fight. I did not come into this with a background in wrestling or kickboxing or anything. I have just been trying to mold myself from the very beginning into a complete mixed-martial-artist. I don’t have a style and this helps me to be comfortable wherever the fight goes.”

The well-roundedness of Mangat’s game can be directly attributed to his involvement in two fantastic camps. In his home province of Vancouver, Mangat trains at the Mamba MMA academy, headed by fellow Indo-Canadian Kultar Gill (noted kickboxing champion and former K1 and Dream star) and boasting the likes of Bibiano Fernandes (current Dream bantamweight champion).

After a few training camps, Mangat is now also a welcomed member of the famed Tri-Star gym of Montreal, a camp seen as among the very best in the world with members including Georges St-Pierre, Rory McDonald, Miguel Torres and Kenny Florian.

“I hadn’t been training for long when I got a call from Kultar Gill asking if I would like to come and join his team to teach and at the same time he could teach me too, as he has some of the best striking in MMA. With Tri-Star, I was asked to go and help Kenny Florian train for his fight with Jose Aldo.

“They flew me out there and it was just surreal. I once waited three and a half hours to get an autograph from Kenny Florian and I asked him all these crazy questions. It was funny because he actually remembered me from that. When I first started training I put up posters of St-Pierre and Miguel Torres and Florian to inspire me, now here I was training with them. The first time Georges St Pierre walked into the gym I literally forgot how to fight. I was working a takedown on a sparring partner and I saw him from the corner of my eye and I was just like ‘Wow! Georges is here!’ and I forgot about my takedown and ended up getting hit with a pretty hard knee to the head.“

“I like going back and forth from Mamba MMA to Tri-Star because I can get different skills from both camps and improve in different areas. Kultar has some of the best striking in MMA and he has helped sharpen my stand-up. Tri-Star has helped me improve my ground work while just being around all these great fighters teaches me things.“

A regular in two of Canada’s best MMA camps, ‘Saint-Lion’ has picked up the kind of invaluable experience that can only be gained from working alongside the very best in the sport. His analytical approach to MMA combined with the caliber of training has helped him push his career in the right direction, but there is another part of him that Mangat feels has given him the determination and belief to pursue his dreams.

“I am a Sikh and we are a warrior religion. I think about all the heroic tales of courage in the face of adversity our people have gone through and I use that to find strength when I am getting into the cage. I want to follow the true path of a warrior and when you are a Sikh it is in our history. I want to be a good person outside the cage but inside I want to unleash a lion. This is about sacrifice and when it is all in front of me in my religion it just makes it that much easier for me to push myself in training and through the later rounds in fights.”

His intelligence and focus mark Mangat out as one of not just India’s but the world’s best prospects in MMA. He has now become somewhat of a celebrity within certain circles in British Columbia and in the Indian community, but come his Super Fight League debut on May 6th Mangat is determined to show that the hype surrounds him for a reason.

“I have always dreamed about fighting in India. I am going out to look to put out a statement in my next fight. I want everyone to be talking about it. I want the people online, the Bollywood stars, the MMA fans all to sit up and take notice. I don’t want anyone to forget the name Saint-Lion after this. I have sacrificed everything for this, putting in hours and hours of work for over four years. I want to be ‘that’ face, I want to the SFL poster boy, but first let’s just see if they like me after my next fight.”

A teacher to kids and an inspiration to all, usually to be seen supporting a beaming smile, with the manner in which Mangat conducts himself it is hard to see why anyone would not like him. However, should anyone not like him, there is only one way to remedy this and that is for him to keep doing as he has done so far. As they say, everyone loves a winner.

Watch Gary Mangat take on Liu Si Cong at SFL 3 on May 6th, Live and exclusive on http://www.youtube.com/sfl.