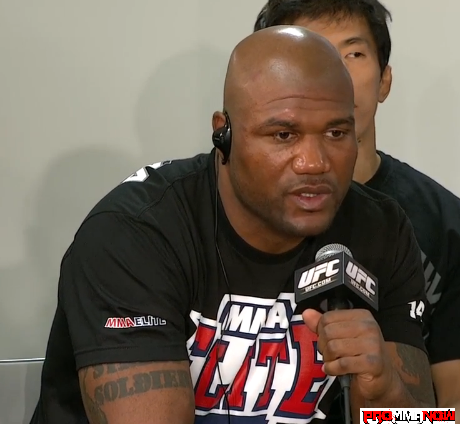 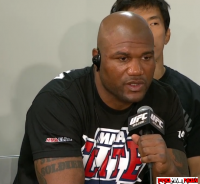 Quinton “Rampage” Jackson has always had a volatile relationship with the UFC and recently Jackson has been taking every chance to voice his displeasure with the Ultimate Fighting Championship.  After a decision loss to Ryan Bader at UFC 144, Jackson has continually taken issue with UFC’s match making and who he has been paired up with during the course of his UFC career. Jackson spoke on the issue on the March 12th edition of HDNet’s “Inside MMA” television show:

“I’ve been upset with the UFC and the opponents they’ve been giving me. I think Joe Silva needs to be shot in the face. I’m sorry, but if you got a fighter like me who likes to go out and put on fights, why you giving me wrestlers who are gonna take me down and hump me? I’m sorry. But I’m a little tired of the UFC and their texts. After my fight with Jon Jones, they told my manager that I was losing my appeal, that rappers and stuff don’t come out to watch me fight no more, that the fans don’t really like me no more. And it was getting close to the time for me to renegotiate, and PRIDE did the same thing to me. For me, the respect is worth more than the money. I’ll go fight for some other show for free. I’ll prove to the fans that I’m not all about money. I’ll go fight for some other show for five dollars. I wish I didn’t have to fight. I wish I didn’t have no more fights with them (UFC). I’m trying to get out of this one fight.”

Despite his wishes, Rampage is contractually obligated to fight one more time under the UFC banner. A rematch with Shogun Rua was in the works till Rampage elected to get double knee surgery to repair his damaged knees. Once he heals from going under the knife, Jackson will fight one more time for the UFC. Jackson was back on HDNet’s “Inside MMA” this past Friday night, where he said once this fight is over he is done with the UFC:

“After I leave the UFC, I’m done with them! Just like when I left PRIDE. You remember when I left PRIDE? It’s over. I was very loyal to PRIDE. I fought for PRIDE, and I fought the way I fought to put butts in seats. I took risks, slammed people and stuff like that. PRIDE did a good job. They built me up. I wasn’t that good when I first came out. I fought Sakuraba and they built me up and then threw me in some tough fights. That’s the way you’re supposed to do it. Now, the UFC, I was a better fighter when I came there. My second fight, they throw me to Chuck Liddell. The fans didn’t know who I was. I knocked him out, the fans booed me. That changed me, who I am towards the fans. I used to be the nicest guy towards fans. My first time getting booed. How are you going to boo somebody for knocking somebody out? But I got a whole other opinion on that. And now, the UFC’s just throwing me all these boring fighters, these game planners, these wrestlers. I’m the type of fighter who you should match up with people who want to fight excitingly. You know what I’m saying? Because I’m going to be the type of fighter who puts butts in seats.”

Jackson also went on to say that in his final UFC fight he hopes it will be someone who, seemingly, won’t be going for a wrestling based decision win:

“I would love to fight somebody like Shogun. Somebody like Forrest. Somebody who beat me before. Somebody who wants to put on a good fight. I’m tired of fighting these guys who are cowards. I call them cowards. They just run around the cage, they game plan and they take you down. It’s okay to take people down, but they just hump you and lay down on top of you the whole time. That’s what’s disgusting to me.”

What are your thoughts nowadays on the former UFC champion? Does he have a case or is he a bitter fighter on his way out?